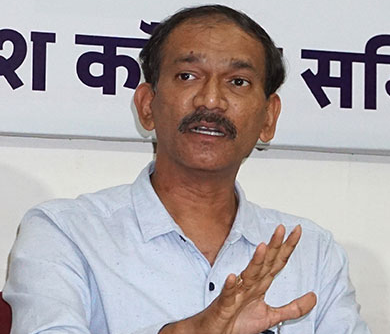 Girish reacted to the reports of unrest in the government with Cabinet ministers and MLAs accusing each other and meeting of Panjim MLA Atanasio Monserrate with Chief Minister Dr Pramod Sawant, on Monday.

“The single-point agenda of the BJP government to take huge kickbacks and commission on every deal has made Goans less fortunate. Goans are now suffering from shortage of oxygen, medicines, ventilators, and vaccines,” stated Girish. He also said that the people are gasping as oxygen is in short supply. There are no beds available in any of the healthcare facilities. Doctors and nurses are exhausted beyond capacity.

“Sadly, ministers and MLAs attention is only on making money by grabbing lucrative ministerial berths,” he alleged.

“The greed of BJP has stooped to a new low with the government now making business of people’s sickness,” stated Girish.