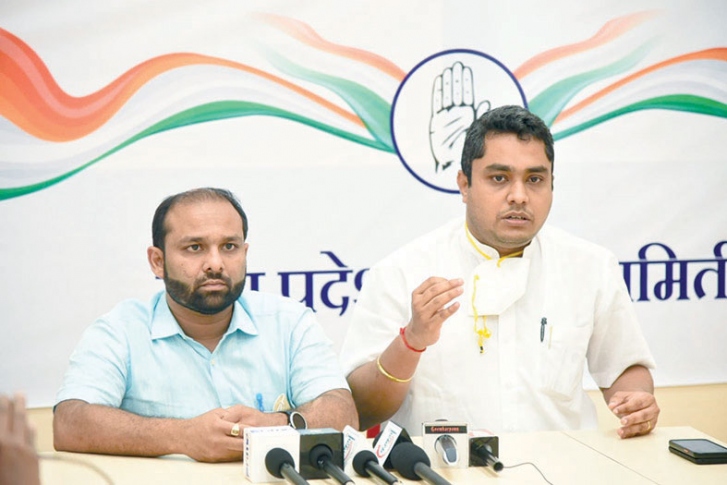 In a show of unity, Congress General Secretary Sunil Kawthankar and Goa Forward General Secretary (Org) Durgadas Kamat together addressed a press conference saying that the BJP will have to face the music if unnecessary

action is taken against the alliance partners.

Kawthankar said that the essence of democracy is under threat as BJP is using government machinery to deter the opposition from campaigning. “BJP leaders are campaigning with more than ten supporters, but no action has been taken against them. But Congress & GFP workers are being harassed even if our campaign abides by all rules,” said Kawthankar. “The BJP is on the back foot in the face of the immense support Congress is getting from across Goa. They are in a frustration mode and hence are planning to target leaders of the opposition, with trumped-up charges,” he added.

GFP’s Kamat said Chief Minister Dr Pramod Sawant will have to face the courts after the Congress-GFP government comes to power.

“Sawant is misusing his power to harass the opposition. But we will not sit quiet, and will write to the ECI at Delhi exposing the illegal deeds and actions of the BJP,” he said. He further alleged that government officials have become puppets of the ruling party and are working at the behest of BJP leaders. “All these government officials should understand that BJP is facing defeat and the Congress along with GFP will form the next government. They should stop working at the behest of the BJP, or face strict action under the next government,” Kamat said.

Kamat added that the BJP government is desperate to file fake FIRs against the opposition parties and try to suppress their voice. “We are aware of the plans of BJP. Nothing will deter us, as the people of Goa are with us. We will fight against this ‘dadagiri’ and emerge victorious,”said Kamat. “It is in the BJP’s blood to spread falsehoods and lies, but the people of Goa are now aware of this and will not fall prey to their campaign of misinformation,” he added.