Locals of Cansaulim, Velsao and other villages fiercely object to officials sent by CM and railwaymen to inspect site of rail double tracking; Villagers oppose the land acquisition process and demand withdrawal of notices 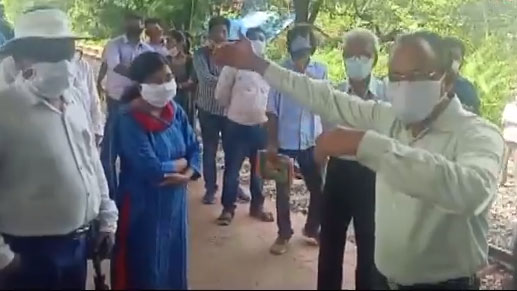 All seems to be not well in the matter of doubling of railway tracks project in the portion passing from Cansaulim and other coastal villages of Mormugao. The govt officials and SWR officials got the bitter taste of this on Thursday morning after SWR and Govt officials, reportedly without giving prior intimation to the local MLA Alina Saldhana turned up to “inspect” the railway tracks and lands intended to be acquired for the project.

Speaking to reporters, Saldhana along with the civil society members expressed shock at the sudden development with regards to the track area inspection planned to be carried out by SWR and govt officials without confirming with the MLA and locals concerned.

Saldhana said that she was surprised after she learnt from her personal secretary that the site inspection has begun but during the meeting with the Chief Minister, it was decided that there will be interaction and communication with the local MLA and few locals but this didn't happen till as late as Thursday morning, just hours before the inspection planned by the government.

"My Secretary tried to confirm about this inspection with a Govt representative who is the OSD to the Chief Minister but he too didn't give any response initially. On Thursday morning hours before the inspection, we were told that it’s at 10 am which is not acceptable,”

The visibly upset people of Cansulim Velsao and Arrosim and other villages had a heated argument with the government and South Western Railway officials. Their grouse was that while they were waiting for them, for the last there days there was no confirmation or communication from the government’s side.

The re-inspection and re-surveying of this track, the area has now been planned on Tuesday morning.

She also questioned that people wanted to know the quantum of coal which would be transported via these tracks and stated that people residing nearby the railway tracks from coastal villages of South Goa are already suffering due to coal dust pollution and the govt should think about this issue.

Saldhana also told the locals that Joao Barros Pereira, Cansaulim local who was present at the Cansaulim railway station, especially for the inspection, said that the damage to their ancestral houses has already occurred and cited his own example wherein his more than a century-old ancestral house has developed cracks and suffered irreparable damage.

Olencio Simoes, Goenchea Raponkarancho Ekvott general secretary said that the recent incident of not informing local MLA about the site inspection, arguing with the locals is an insult to the elected representative. "Recently one top-level Railway officer had insulted the local MLA and people calling them “you Portuguese” and now not intimating the local MLA about the inspection and not listening to people's request is not correct on the part of Govt officials. This attitude of railway and govt officials need to be changed" he opined.

Simoes further stated that the land acquisition by railways for this project has been opposed by us right from 2008. In 2008 when the Revenue Department came up with a notification, the names of the affected owners were mentioned in the notice unlike the recent notice wherein no name of the owners has been mentioned.

He also added that the villagers together are strongly opposing any additional railway line coming through Cansaulim. We don't want a track and is it built for coal?. The previous Chief Minister late Manohar Parrikar had assured us that the doubling of railway track won't come up. Therefore we demand before the CM to immediately halt any form of land acquisition process for this project and immediately suspend the notices published recently in newspapers.