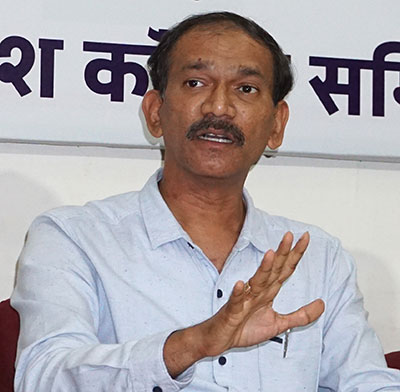 PANJIM: The Goa Pradesh Congress Committee (GPCC) has once again come down heavily on the government for creating a debt crisis and resorting to alleged corruption across various sectors.

GPCC President Girish Chodankar, while addressing a press conference in the party’s head office in Panjim on Sunday, warned that the ongoing tenure of the BJP could be the last in Goa owing to anti-people governance.

“This is the last time that BJP is in power. The way the government is increasing borrowings, it does not realise that the loans have to be re-paid. The government is only increasing financial difficulties for the State and its people,” he said.

The party also blamed the government for a failed law and order, courtesy, cases such as murder of Margao jeweller, killing of an activist at Torda-Porvorim, drug menace, etc. Chodankar alleged corruption sating, “There exists wholesale corruption. By hook or crook, the government is resorting to corruption in anything and everything. They only want to make money, loot Goa, and work anti-people,” the GPCC president added as he mentioned about labour gate scam, controversy around IIT project, etc.

Commenting on the arrests of accused in the killing of Vilas Mhetar, a Torda resident, the party demanded that investigation should not meet the fate as the Margao murder. “We all applauded breakthrough in the Swapnil Walke murder case. But as on date, the mastermind is at large. The police are tight-lipped on the brain behind the crime. We feel there is political pressure and we don’t want the same with the Porvorim murder probe,” he said.

The party also questioned safety of activists across the State, who have been exposing illegalities. “Murder of an activist is a failure of democracy,” Chodankar said referring to Mhetar case, as the man had allegedly exposed illegalities by a builder prompting panchayat to stop some projects. Five persons including a real-estate businessman were arrested on Saturday. They were remanded to 5 days police custody on Sunday.