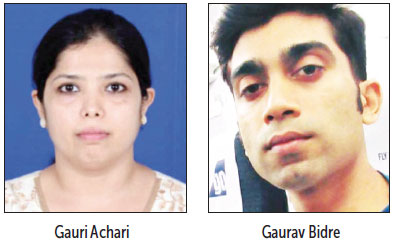 PANJIM: He gave strength training to India Under 19 players and fitness training to Commandos of the Anti-Terrorist Squad. But the hands of the coach and trainer Gaurav Bidre  are covered in blood as he's arrested for the murder of Professor Gauri Achari and dumping her body in the jungles of the Kadamba bypass near Panjim

The Old-Goa police on Friday arrested Gaurav Bidre, 36, of Sawantwadi, Maharashtra and living in Old Goa for abducting and murdering 35-year-old professor Gauri Achari from Corlim.

According to the Old-Goa PI Dinesh Gadekar, on Friday victim’s mother had lodged a complaint against Bidre for allegedly abducting her daughter. PI Gadekar further informed that during the course of the investigation the accused, who is a gym instructor, was placed under arrest and was thoroughly interrogated. He confessed that he allegedly murdered Gauri by strangulating her in her car at Corlim. He later parked the car near Primos Park, Corlim, shifted the body into an SUV and dumped it in the jungle near Kadamba Bypass road, Old-Goa.

Bidre was the former strength and conditioning coach for the Board of Control for Cricket in India (BCCI) and the former strength coach for India U-19 cricket team. He was also a model. He had also given fitness training to commandos attached to the Anti-Terrorist Squad (ATS) of Goa Police last month.

The police recovered the body at the instance of the accused and sent it to the Goa Medical College and Hospital (GMCH), Bambolim for post-mortem examination.

Prof Gauri Achari was teaching at the Government College, Khandola. On the fateful day, Prof Gauri had gone to the college and as she did not return home, her mother filed a complaint. The police, based on the information given by the mother and Gauri’s vehicle location and mobile phone call details, found that she had umpteen times received calls from mobile phone number belonging to Bidre.

A police team first questioned Bidre at his flat and as he tried to give evasive replies, he was brought to the police station where he broke down during the course of interrogation. Though the exact cause for murder is yet to be ascertained the police suspect that the accused killed her due to a strained relationship.

It is learnt that three years ago Bidre was arrested for allegedly molesting a woman in a gymnasium at Borivali, Mumbai and was out on bail.

A case has been registered against Bidre under section 302 and 201 of IPC and PI Dinesh Gadekar is conducting investigations under the supervision of Panjim DySP Sudesh Naik and overall supervision of North Goa SP Shobit Saksena.