PANJIM: The High Court of Bombay at Goa has directed the Goa Coastal Zone Management Authority (GCZMA) to demolish Sunburn Beach Club, a nightclub-cum-bar and restaurant for violating the CRZ rules by setting up a property in the No Development Zone (NDZ). 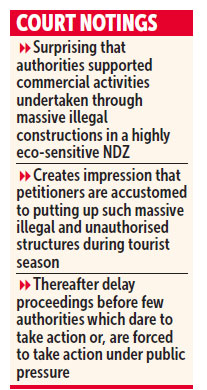 The Bench observed that the illegal structures put up by the petitioners in the NDZ were despite a solemn undertaking furnished by them to GCZMA that they would demolish these ‘patently illegal and unauthorised structures’ in the NDZ.

“What is surprising in this matter, however, is that the authorities like Panchayat, Tourism Department, FDA, Excise Department, also supported the commercial activities undertaken through these massive illegal constructions put up by the petitioners in a highly eco-sensitive NDZ. The GCZMA had to ultimately direct all these authorities to revoke the permissions. All this creates an impression that the petitioners are now accustomed to putting up such massive illegal and unauthorised structures in the said property during the tourist season and thereafter delay the proceedings before few authorities which dare to take action or, are forced to take action under public pressure,” the order states.

“Once the tourist season concludes, the petitioners give undertakings of

demolition and there is no clear material whether such undertakings are actually complied with or not. This is an extremely sorry state of affairs. The Supreme Court has already held that the Panchayats or other Authorities cannot grant permissions in an area covered under the CRZ Notifications unless the GCZMA clears such projects or proposals. Having regard to the conduct of the petitioners, certainly, the petitioners cannot claim the benefit of regularisation. Any regularisation benefit extended to the petitioners, would render the environment protection laws in the State of Goa, a complete mockery,” Justice Sonak further noted.