Herald is a people’s paper, doing great service to the state and country: Governor of Goa

‘When you are with the people, all will follow; In short, this is democracy’, Much pleased that people’s causes are always raised by this paper, said Governor Pillai 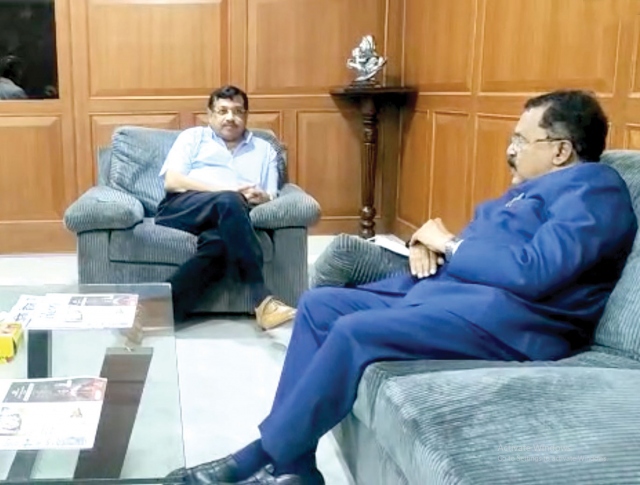 VERNA: Goa Governor Dr. P S Sreedharan Pillai said that Herald is teaching people about the truth and thereby doing a great service to the State and the country. “I’m much pleased that people’s causes are raised by this paper”, he said, during an interaction with the Managing Director and Editor in Chief of Herald Publications, Raul Fernandes.

Governor Pillai and Mr. Fernandes spoke on a wide range of issues concerning Goa and exchanged views on the way forward for the future of Goa.

The Governor, who was on a courtesy visit, to the Herald Printing press at Verna, also met other personnel of Herald Publications. After a tour of the premises, the Governor remarked “I’m beyond impressed (at the facilities)”

The Governor said that he was extremely happy to visit Goa’s oldest newspaper, which had a good tradition. “I am very happy to see this great newspaper of Goa. It is the oldest paper having good tradition and it is the largest paper,” he said.

Speaking further before his departure he said “I’m under the impression that Herald is teaching the people about the truth, it’s a people’s paper and doing great service to Goa as well as the country. When you are with the people, all will follow, in short, this is democracy"

“Herald is right on top and after assuming the charge as Governor, I read Herald daily. In a democracy it is the bounden duty of the press to educate the masses,” he added

The Governor said that after India attained freedom in 1947, sixty percent of its population was illiterate. How this illiterate take a decision on the future of the country?, he said adding that the first Prime Minister Pandit Jawaharlal Nehru had said that politicians and press will teach the masses, and a working society will be there every five years.