Zenito is absconding and he has applied for anticipatory bail, confirms North SP; District & Sessions Court to hear matter today 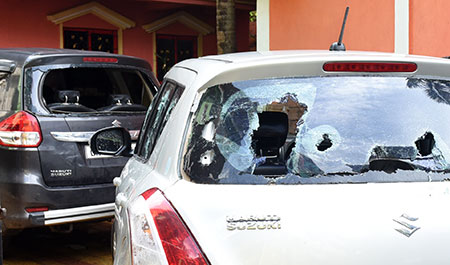 North Goa police teams formed to assist the investigation team at Old Goa were deployed across the northern coastal belt to search for him and two of his associates, but in vain. The search team nevertheless swooped down on a person allegedly peddling drugs in the wee hours of Sunday. The man is arrested and drugs recovered from his possession seized for probe. 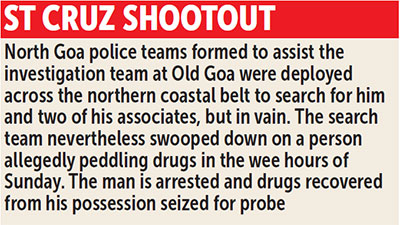 Reliable police sources said they raided a few places including the coastal stretch in search of the alleged accused, who are underground since the shootout incident on June 20. “We searched several places where the three alleged accused were suspected to be hiding. Some of his close aides were also interrogated,” the source said.

The search operation was thereafter temporarily aborted, only to be resumed the following day.  In fact, search for Zenito and two accomplices, has been ongoing since past 5-6 days. “We are on a lookout for the accused for the last couple of days. Suspected hide-outs in the north and south districts have been searched, and it continues,” an officer said.

While search for Zenito and gang continued on Sunday, the convict moved the local court seeking anticipatory bail in the shootout case. The matter, before the District & Sessions Court will be heard at 11 am on Monday. North SP Utkrisht Prasoon, on being contacted by Herald confirmed that “Zenito is absconding and he has applied for anticipatory bail.”

The district police have so far arrested 20 persons (excluding three minors), some of whom already have serious charges pending against them. One of the accused Marcelino Dias is also booked for murder after he accidentally shot his fellow gang member Sonu Yadav during the violent attack on their rival Imran Bepari’s house at St Cruz on the early morning of June 20.