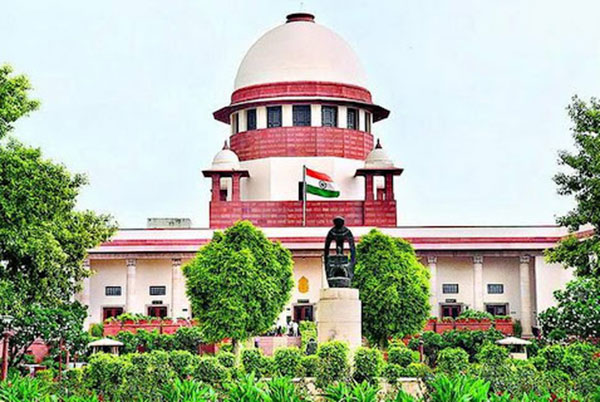 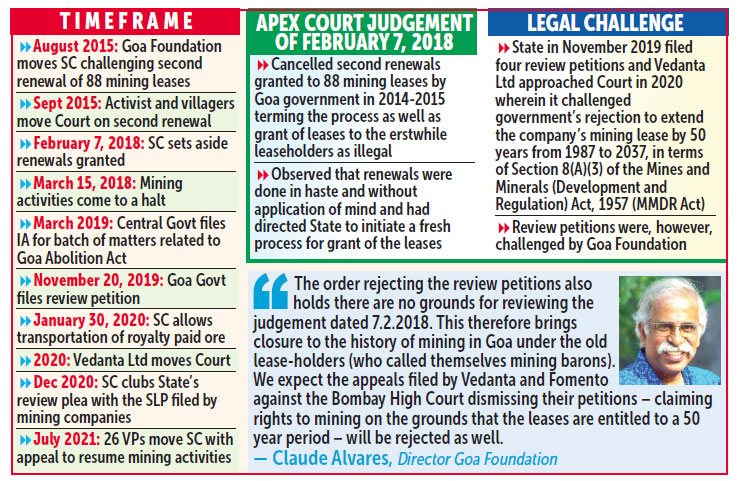 PANJIM/NEW DELHI: Goa government’s efforts to recommence iron ore mining activities in the State have been scuttled by the Supreme Court that dismissed the review petitions filed by the State and Vedanta Ltd challenging the top court’s order of February 7, 2018 that had set aside the renewals granted to 88 iron ore leases.

The division bench of the Supreme Court comprising Justice Dr Dhananjaya Y Chandrachud and Justice MR Shah dismissed the review pleas on grounds of limitations as well as merits, while objecting strongly to the delay in filing the review petition. Eight review petitions had been filed by the State government and Vedanta Ltd.

The State’s delay of 20-26 months to file the review petition challenging the Supreme Court order was the major ground for dismissal as the bench ruled that the judgement needs to be challenged within 30 days from the time of its delivery.

The Bench conducted the review through circulation on July 9, but its judgement was mounted on the Supreme Court website only on Tuesday.

“In accordance with Rule 2 of Order XLVII of the Supreme Court Rules, 2013, an application for review of a judgement has to be filed within thirty days of the date of the judgement or order that is sought to be reviewed,” the Court noted.

It said no cogent grounds were furnished for the delay between 20 and 26 months, challenging the judgement by a Bench of Justices Madan B Lokur and Deepak Gupta, who had delivered the February 2018 verdict and had retired from the Court on December 30, 2018 and May 6, 2020, respectively.

The bench said such practice must be firmly disapproved to preserve the institutional sanctity of the decision making of this Court.

The only choice left with the State government now is to follow the 2018 judgement that directs it to grant fresh mining leases as per the Mines and Minerals (Development and Regulation) Act of Parliament and secure fresh environment clearances to resume mining by the new bidders. Its intense lobbying with the Modi government over the years to amend the Act did not yield any result.

In 2015, a series of petitions had been filed by Goa Foundation, villagers namely Rama Velip, Tulsidas Shaba Velip, Abhijit Prabhudesai and Dinanath Gaonkar and activist Sudip Tamankar, who challenged the renewal of leases instead of granting fresh ones. They had pointed out the haste and illegal manner in which the renewals were granted by then Laxmikant Parsekar government between November 2014 and January 2015.

Goa Foundation, whose PIL eventually led to a ban on illegal mining industry in 2012, has also said the coalition government’s decision to renew mining leases and not auctioning them will cause a loss of Rs 80,000 crore to the State exchequer.

In its 2018 judgement, the Supreme Court had ruled that the second renewal of the mining leases granted by the State of Goa was unduly hasty, without taking all relevant material into consideration and ignoring available relevant material and therefore not in the interests of mineral development.

“The decision was taken only to augment the revenues of the State… The second renewal of the mining leases granted by the State of Goa is liable to be set aside and is quashed,” the Court had ruled, which thereafter led to closure of the mining industry from mid-March 2018.