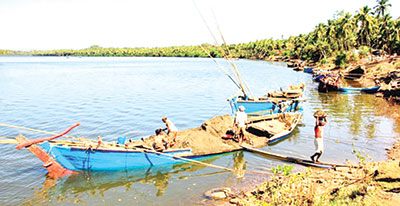 PONDA: Following Sunday’s accident wherein a sand-laden truck overturned at Apewal-Priol, the locals have expressed fear that such accidents could prove fatal in future.

According to locals, despite the ban on sand mining, illegal sand extraction and transportation continues in Priol. During transportation, the drivers hurry up and this results in accidents, which could even prove fatal.

Locals said, “No doubt the government officials, including those from the Mines Department, conduct raids but despite this sand extraction continues.”  They demanded that either government put an end to the sand theft and its illegal transportation at night time or commence legal sand mining.

According to locals, there is ban on sand mining as the issue is pending in court.

Former sarpanch Mangaldas Gaude said, “Today the entire village of Apewal woke up to the news of the truck accident. Despite ban on sand mining, illegal sand extraction is taking place at night and the accident is a proof of sand transportation taking place in the dark.”

He said, “When I rushed to spot early at 5.30 am it was frightful scene. The truck had overturned blocking the entire road and another truck was parked near it. The truck driver was seriously injured and the sand got spilled on the road. In case if any innocent locals meet with such accidents it would be great loss. The vehicle was badly damaged in the accident.”

Goa Dairy’s former chairman Anup Desai, who is also a Priol resident, said “Sand transportation takes place at night after 11.30 pm and continues till early morning and this is due to illegal sand extraction despite the ban. Officials of various departments conduct raids which are for name sake. The illegal extraction continues in Savoi-Verem, Betki and Volvoi in Priol. This illegal sand transportation poses risk to life of locals. The government should legalise the sand extraction so that such accidents and theft of sand will not occur.”