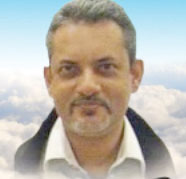 As Vice Chairman of NGO Goencho Ekvott, late Julio Cedric Aguiar took his responsibility very seriously, not once remaining absent despite the fact that he had to travel almost 150 kms per day from Caranzalem on the West Coast to Sangod in the East creating public awareness in the marginalised sector against the Tamnar Power Transmission Lines, one of the three linear projects.

By evening he would head to South Goa to meet up with anxious colleagues at Goencho Ekvott, who were themselves creating public awareness with respect to the other destructive linear project: the double tracking of South Western Railway route from Mormugao, through Salcete and Quepem and thereafter cutting through the Bhagwan Mahaveer Wildlife Sanctuary and Mollem National Park. Julio Aguiar was a gentleman who appeared to be possessed travelling from the north to the east, then to the west and at times deep in the south too.

He was the foot soldier along with Dr Claude Alvares and others and ensured that the Supreme Court appointed Central Empowered Committee (CEC) were taken to every nook and corner of the Western Ghats to fully comprehend the irreversible destruction that the three linear projects would cause to our flora and fauna.

In fact ‘Amche Mollem’ was his creation. Those who were close to the several movements created simultaneously to defend Mother Goa will surely credit late Julio Cedric Aguiar for the recent favourable verdict by the Supreme Court in the Tamnar Power Transmission Lines case and thereafter on the double tracking as well. He was the one who was the link between Amche Mollem, Goencho Ekvott, Goa Foundation, the Youth of Goa (CYFC) to name a few.

Through 84 public awareness meetings in the midst of a raging pandemic, Julio kept the flames of the movement burning bright, sometimes going without meals, or sleeping on bare floors despite the fact that he came from one of the most renowned and respected families of Ponda Taluka!

Julio had made social activism his life goal but despite that he was always soft spoken, he went about executing his assignments silently, never asked for any glorification, wasn't seen much in pictures or videos, not seen at press conferences but he would work day and night to 'save Mollem'.

He later joined us at Goencho, to save our ‘heritage homes’ and thickly populated villages from destruction at the hands of South Western Railway ....when the CEC report was submitted to the Supreme Court, villagers wanted his contact number to thank him personally for his selfless service. Such was the love for this gentleman worthy of all the praise.

As we remember his contribution to the movement against coal, let us all today honour this ‘Gentleman with a golden heart' and pledge to fight our battles with renewed vigour to safeguard Goa from the irreversible destruction of our environment.

You have worked tirelessly Julio, to save your motherland Goa from the most destructive elements associated with the coal mafia, for that we shall always remain indebted to you dear friend...you shall go down in history as the 'saviour of our forests'. Hope we can avenge your untimely death through the scrapping of the double tracking project.