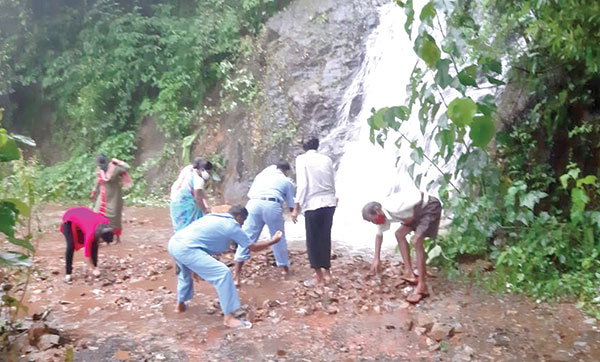 Sanguem:  The KTC driver and conductor on the Netravali-Salgini route, doubled up as labourers along with the villagers to clear road blockades caused due to the boulders at several places leading to Salgini village.

The already dilapidated road which is causing problems to the villagers added to their woes after boulders from adjoining hillocks came tumbling across the road at several places during the rains making the road treacherous for vehicles.

However despite the precarious condition of the road, the KTC driver and conductor of the lone KTC bus plying to the village took on the task along with the locals to clear the road.

During the last few days, the situation worsed due to very heavy rains in the village. The driver and conductor alongwith the passengers were compelled to get down from the bus and clear the boulders on the road leading to the village. The situation at several places along the 18 kilometre road is in similar conditions as water flows across the road during monsoon as several waterfalls adorn the village.

It may be recalled that the villagers from Verlem, Salgini and Tudov had threatened to boycott the Zilla Panchayat elections scheduled to be held in March this year so as to pressurise the government to undertake the construction of the dilapidated road in the village. The work was held up due to objections raised by the Forest Department.

The move to boycott the polls had forced the Deputy Collector of Sanguem Ajay Gaude alongwith Sanguem Mamlatdar Manoj Korgaonkar to rush to the village and urge the villagers to withdraw their decision while assuring that they will arrange a meeting with the Collector South Ajit Roy.

However, following the outbreak of Coronavirus, the project was kept on hold. Before the onset of monsoon, the Deputy Collector Ajay Gaude again visited the village and assured to fulfil the assurances given by the Collector.

However, the villagers are still waiting that the assurance given by the Collector will be fulfilled soon.