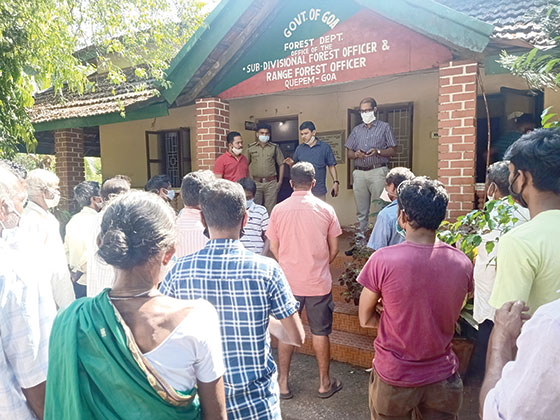 quepem: Karla villagers of Cavorem-Pirla staged a protest against the Quepem Forest Department on the FRC Forest rights cases.

The villagers also discussed the issue of title rights on the ownership of land that is being cultivated by tribals or forest dwellers as on December 13, 2005, subject to a maximum of 4 hectares.

The issue came up when the Forest Department officers conducted a survey in the presence of the Deputy Collector’s staff and did not allow the villagers to interact during the survey.

The villagers said that according to the 2005 Act, the person who cultivates the land on forest area has certain rights on the cultivated land. Around 40 villagers asked the Dy Collector to find a solution. There were places, they said, that trees are dead and no cashew farming was taken up in the area.

MLA Gaonkar said after the 2005 Act, which was passed 15 or 20 years ago; these issues have not been solved as yet because forest boundaries have not been cleared and that’s why there is dispute between private property owners and the forest property, which is not marked separately.

Gaonkar also said that there is misunderstanding on this issue between Karla villagers and the forest department because there is no proper communication between them.

Panch Tolyo Gaonkar said that cashew farming is the main seasonal occupation of most of the villagers and their livelihood depends on it.

We will do a proper spot verification of cashew farming cultivated land by Karla villagers. We will discuss this issue at a special meeting with other authorities of the Forest Department to find a solution,” said Surve.