Two such persons were rescued and counselled; Drishti urges citizens to alert lifeguards if they spot anyone on the beach who seems to be in distress 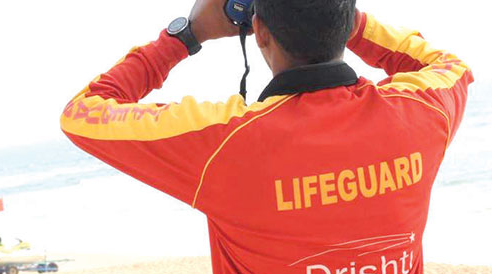 Panjim: The Drishti lifeguards has recorded three cases linked to suicides within less than one month, that saw the death of one victim and rescue of two others who had attempted to do so, by the alert lifeguards.

Details shared by the Drishti Marine states that first case on May 30 was that of a patient from Institute of Psychiatric and Human Behaviour. The man in his early 30s had attempted suicide at Bambolim beach and rescued by lifeguard Gaurav Gawde.

“An alert was sounded by the Bambolim-based IPHB that a patient had fled the facility and a search operation was launched. An alert lifeguard Gaurav Gawde stationed at the Bambolim beach noticed a visibly disturbed male, in the water, along the shoreline and approached him. The man informed the lifeguard that he was going to end his life. The lifeguard calmed the man down and brought him back to shore,” Drishti stated. On verification, the police who were called to the spot confirmed that the victim is the same IPHB patient. He was thereafter handed over to the police.

On the evening of June 11 at Miramar beach, a lady was noticed walking into the sea. Lifeguards on duty Saiesh Balekar and Nilesh Kundaiker rushed towards the victim into the choppy waves, secured her to the rescue tube and brought her to shore. “On enquiring she revealed that she was attempting to end her life due to personal reasons. Police was informed about the same and the victim was handed over to the police,” the agency said.

Another suicide bid was reported at Anjuna beach on June 21 wherein a local fisherman spotted a male walking at the dangerously rocky beach stretch and the rough seas. Drishti stated that the fisherman called out to the person to step back and made attempts to reach him. However the unidentified male took a plunge into the rough waves. The fisherman alerted the lifeguards at the tower who launched a search operation.

There have been seven rescues, two medical interventions and one drowning recorded from April till date.

In the wake of these incidents, Executive Director (Drishti) Ravi Shankar has urged citizens to alert the lifeguards if they notice anyone in distress on the beach. “Along with fear of contracting the virus, disorientation, loneliness, uncertainty arising from financial difficulties or lack of social contact can take a toll on mental health. The last few months have been unprecedented in recent human history. It is imperative that family and friends support and keep a watch out for their near and dear ones and reach out for help from support organizations,” he said.