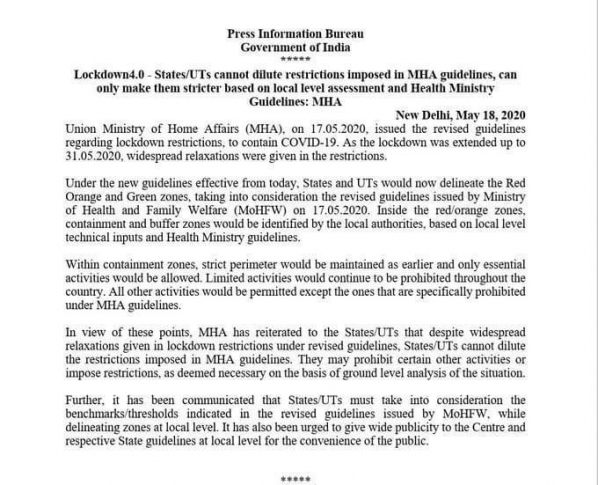 The only change would be the State would not allow the inter-State bus movement to Karnataka and Maharashtra, States which have seen a huge spike in COVID-19 cases in last few days, Sawant said on Monday.

“The present restrictions, which were imposed during Lockdown 3.0 will continue, with no major relaxations, the only major change is that there would be no inter-State bus transport to neighbouring States of Maharashtra and Karnataka,” he said.

The chief minister, however, refused to postpone the Board exams for Class X despite opposition from parents and Opposition parties. “Exams will be held as per schedule with strict social distancing,” he said.

The Chief Minister reiterated that there was no need to panic as there was no community transmission yet. “As of now we have 35 active cases and the tally is 42, including seven recovered. All 35 cases are imported. While 33 cases were imported from Maharashtra, only two were from Karnataka,” he said.

Taking a swipe at his opponents, Sawant said that out of 35 cases, 31 are proper Goans. “It is our responsibility to get every Goan back. If we are fighting for seafarers we also have to see Goans stranded in other parts of the country be brought back home,” he said.

“Only four people tested positive are outsiders, like drivers, 90 per cent of the people on trains were Goans. Only 10 per cent people did not have Goan identity,” he disclosed.

Further, the chief minister said that the Delhi-Margao Rajdhani Express, scheduled for every Saturday, Sunday, has been terminated on the State’s request. “Only one train – Delhi-Trivandrum Rajdhani, will make a stop in Goa, as there are few passengers who disembark from this train, which is manageable for testing. Also all passengers who came by this train last week have tested negative,” the CM added. “On our request, Rajdhani train from Delhi has been terminated.”

Sawant said that 441 stranded Goans will come to Goa in three flights from Italy next Saturday. “MHA has already granted approval to open the airport and hence we can now look at Goans stranded elsewhere to start flights,” he stated.

Asked why the State was charging passengers Rs 2,000 for tests, the CM replied, “The amount is not just for the test, it also includes hotel accommodation for three days and food.”

Giving details on migrants, the Chief Minister said that around 10,000 plus migrant labourers have left Goa till date. “Besides there are thousands more registered to leave Goa,” he said, adding, “The parent State has not yet booked any trains for them despite our request.” About 1.5 lakh migrants have registered to return to their States.

----
Govt to act against layoffs
With reports of large scale layoffs in the private sector, Chief Minister Dr Pramod Sawant warned that the State will take strict action against companies for such practice. “We have urged companies to not layoff anyone at this time. I have directed the Labour Commissioner to look into the matter on priority and take action against erring companies,” he said.
Related news