Issues notice to Chief Secretary, Panjim MLA and Chairman of GPPDA, Directorate of Panchayats, Taleigao Panchayat, the matter will be heard on July 29 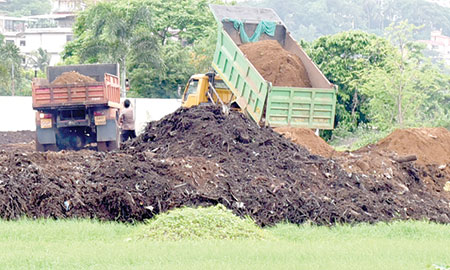 PANJIM: In a major setback to Taleigao Panchayat, the Goa Lokayukta Justice (retired) PK Misra has directed the local body to stop the ongoing filling of fertile agriculture land, where the Panchayat Ghor is proposed to come up, until further orders.

“On careful perusal of the materials, I am of the considered view that there are sufficient and reasonable grounds for preceding further for holding a detailed investigation as contemplated in Section 13 of the Lokayukta Act,” the order, issued on June 29, mentioned.

“Keeping in view the urgency of the matter and the averments made in the application for injunction, I deem it appropriate to pass an interim injunction order injuncting the Panchayat from filling up the low lying land in Survey No 53/5 to 12,” the order said adding that the interim order of injunction will continue until further orders.

Lokayukta also said that since one of the Respondents is an MLA, the Governor is the competent authority.  Earlier this month, several activists were detained and later arrested for protesting at the Taleigao site, who alleged that the fertile agriculture land is been filled to construct the new building.

Addressing the media persons, Adv Pundalik Raikar, appearing for the complainant said, “A complaint is filed seeking detail investigation into the entire land purchase and alleged irregularities taken place during the acquisition process.”

The complainant charged that the village panchayat has illegally and fraudulently trespassed into the fields bearing Survey Nos 53/5 and 12 and has also forged signatures of the farmers to acquire the land.

Meanwhile, Taleigao Sarpanch Agnelo Cunha said that they will abide by the Lokayukta order and take necessary legal course.

He also said that the local body has all valid documents including land acquisition, award and other papers, which would be produced before the Lokayukta.