MMC to go ahead with seven biomethanation plants at Sonsoddo 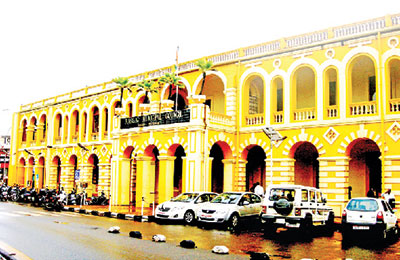 MARGAO: Margao Municipal Council (MMC) on Thursday resolved to go ahead with the biomethanation plants at Sonsoddo following a ruckus at the meeting with the BJP and Congress councillors accusing the Council of project ‘fixing’.

The MMC will have seven biomethanation plants to handle the waste generated by it. MMC chairperson Pooja Naik Kanekar said the opposition to this plan has been overruled and the resolution is passed with a majority.

There was a huge ruckus at the council meeting after BJP and Congress councillors alleged "setting" in the project. The councillors questioned as to why there is no tender. The councillors who objected to the resolution said there needs to be a detailed breakup of the cost to clear any doubts. Councillor and former

chairperson Arthur D'Silva said, "The Sonsoddo plant of Fomento Green started on a trial basis and remained the same always. We don't want another repeat episode at Sonsoddo".

The councillors said the breakup of the cost is necessary as they want to see the scope of work that is with the contractor and exact amount the MMC is spending and on what works.

"The budget of the project cannot double if there is no inclusion of the shade and concrete walls in the cost," said Arthur.

The councillors opposing the resolution said, “This is taxpayers’ money and the municipality owes an explanation to them.”

The MMC chairperson said, "There was a very little opposition and the resolution is passed with a majority.”

Objecting to the word "setting" used at the meeting, Pooja said, "There is no question of setting in this work. This work has been taken up from GEM portal. The allegation against Solid Waste Management Corporation by BJP councillors is surprising as the Chief Minister is the corporation’s chairman".

Pooja explained that the details provided by the GSUDA and GWMC revealed the difference in the cost amount of the Sanquelim and Sonsoddo projects. She said that the project will be completely operated by the contractor for five years which is different from Sanquelim.