Alleges that Margao MLA is against it; Kamat says it is administration’s call 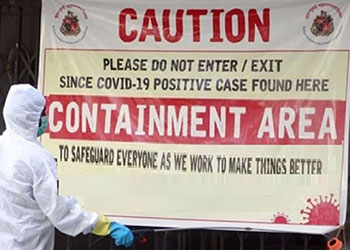 MARGAO: The Bharatiya Janata Party (BJP) workers from Margao met the Additional Collector and submitted a letter demanding that Moti Dongor  be declared as containment zone with strict measures in place.

The BJP alleged that Margao MLA Digambar Kamat is trying not to make Moti Dongor a containment zone, while the Kamat said that it is the call of the administration.

Sharmad Raiturkar said, "Maids and domestic help that come from Moti Dongor  go to every third house in Margao especially Aquem. Hence, it is necessary to ensure that the spread virus is contained in that area".

Advising against stigmatising the Moti Dongor residents, Andrew Sequeira, a BJP member from Aquem questioned the Kamat’s silence when the virus has started spreading in Margao.

Margao BJP Mandal president Rupesh Mahatme and general secretary Ketan Kurtarkar urged the Chief Minister and Health Minister that the Moti Dongor be declared as containment zone as the COVID situation may go out of hand.

Reacting to allegations, Margao MLA Digambar Kamat said, "We have to remember one thing that I don't have a right to declare any of the zones, this is the prerogative of the District Administration under the Disaster Management Act and not mine. Some less educated people are forwarding things regarding the containment zone".

Congress’ Margao block demanded that the BJP office-bearer, who spread the message against Margao MLA for allegedly spreading lies on social media, be booked.

Margao Congress Block president Gopal Naik demanded that the former BJP Mandal president Chandan Naik has spread lies with an intention of defaming Leader of Opposition and Margao MLA Digambar Kamat on the issue of declaring Moti Dongor as containment zone after COVID positive cases were detected in the area.

"We demand that the Chief Minister must immediately book Chandan Naik and other BJP workers, who have made defamatory remarks against Digambar Kamat,'' Gopal demanded.

"This post has also resulted in panic and fear amongst the people due to misleading facts and comments made in the posts on social media,” Naik added.