Margao meeting witnesses a sea of protestors against CAA 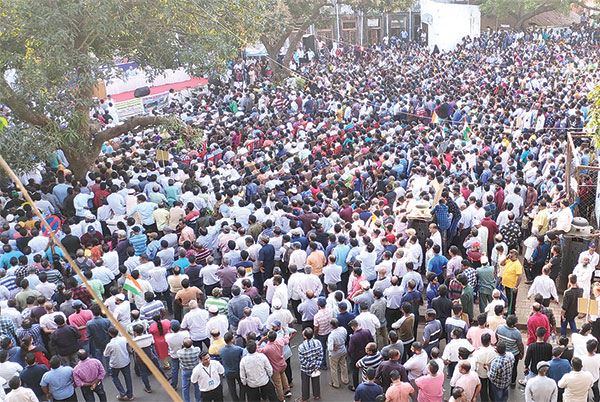 MARGAO: The anti-CAA/NRC/NPR meeting held at the iconic Lohia Maidan in Margao, on Friday, witnessed a sea of people from all walks of life. The huge crowd showed unanimity to oppose the Act as well as the NRC/NPR and to disobey any attempt of the Government asking for papers to prove citizenship.
Fr Savio Fernandes of the Council for Social Justice and Peace, said, "The Citizenship Amendment Act (CAA) and the government's intention to implement a National Register of Citizens (NRC) are literally shaking the foundations of India's existence as a pluralistic, multi-faith society where all citizens are supposed to be equal before the law.”
"The amended Citizenship law would undermine the commitment to equality before the law enshrined in India's Constitution. It would obstruct India's obligations under the International Covenant on Civil and Political Rights and the Convention for the Elimination of Racial Discrimination, to which India is a State party, which prohibits discrimination based on racial, ethnic or religious grounds," he added.
Dr Oscar Rebello, Prabhakar Timble, Damodar Mauzo, Muzaffar Shaikh, Devasurabhi Yaduvanshi and several others spoke at the meeting. The meeting was also attended by MLAs Luizinho Faleiro, Churchill Alemao, Aleixo Reginaldo Lourenco, Vijai Sardesai, Digambar Kamat and former MLA Jose Philip D'Souza.
Dr Rebello said this government is out to protect God. "I may not believe in God but I believe in humanity. I only see a citizen here no caste, no creed," he said.
"Why are they doing vertical division and dividing the country? I dare them to do horizontal division into rich and poor and make the rich pay for the betterment of the poor," said Oscar, while alleging that the Acts and provisions are only going to be the targeting all the poor.
Rama Kankonkar said that the Hindus are in trouble because of Narendra Modi and Amit Shah. "Do tribals have birth certificates?" he asked while challenging the Chief Minister Pramod Sawant to debate with one person on this stage if he meant to keep his word.
Prabhakar Timble said that the noteworthy thing of protests is these are voluntarily done by the youth and people. "The political leaders are not seen on the stage," he pointed out.
"There was a meeting planned at Mapusa but at the last movement some 'deshpremi' met the collector and the permission was denied. The withdrawal is not defeat of protestors but is of the government," said Timble. "If it was all peaceful in Goa then why was the meeting not allowed?" questioned Prabhakar.
"The Rail officer who called the elected MLA of Cortalim Portuguese speaks about the mindset which people see Goans. We are not Mughals or British, we are Goans," said Timble.
Devasurabhi Yaduvanshi said, "Fight today is not about the citizenship but there is a much larger game. Don't forget this Amit Shah is an excellent planner. He is very stubborn to abrogate CAA, NRC or NPR. Detention camps are for show but the real plan of CAA/NRC is to disenfranchise as many Muslims from voting as they don't vote for BJP and Catholics here you are next."
She said this is a game to remove Dalits and SCs, STs from voting.
"Vote share of the BJP will increase to 47 per cent and will keep winning for next 50 years by means of these Acts," she said.
Muzaffar Shaikh said, "Many MLAs came to support us today. A small protest started from Margao has become big today and we will be on the streets until the law is repealed."
Related news