Herald meets families who live by the railway track in the coastal stretch of Mormugao taluka, who are dreading the proposed double tracking project as they will lose their houses, their livelihoods and the history they share with the land on which their ancestors called home. This is the first part of the three-part series on their plight. 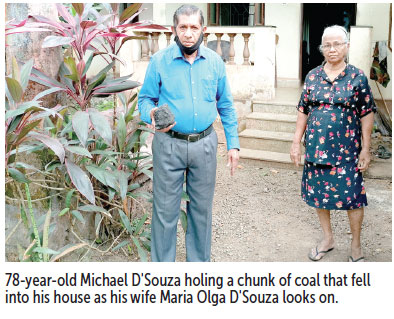 VELSAO: At an age when senior citizens in Goa want peace and quiet, those living in Velsao near the railway tracks don’t even get sleep at night due to the constant din created by trains moving at such high speeds that the walls of their house vibrate as well.

For someone who is not used to experiencing such conditions, it feels like an earthquake. Grandchildren of these senior citizens get scared so badly, they want to rush back to their parent’s house away from this part of ‘Primero Waddo’, which is sadly not as calm as it once was.

What makes matters worse is that this double jeopardy of unbearable noise and rattling windows is just one part of the larger problem these residents face on a daily basis.

For instance, the railway track, which is situated at a height above their compound walls, is at a touching distance from the entrance of their houses, thereby blocking the only pathway and access the residents had to the rest of the village.

70-year-old Maria Olga D’Souza, who has been living here for more than four decades, explains that when it rains, all hell breaks loose as in the absence of any drainage system, excess water flows right into their house.

“If there is any accident or someone slips due to all this water, it is not easy to call a doctor for help or for us to the hospital. There is not enough space for a vehicle to move here. And we can’t move from the side of our house or the back, just this way alone. We have no choice but to walk through knee-deep high water to try and push the water out of our house!” she added.

She felt that the care-a-damn attitude means that they have to continue to suffer in silence with no hope of getting the kind of basic infrastructure they deserve. She added that they had to rebuild their house years ago as this ancestral house was about to collapse as the structure of the walls suffered damage due to the vibration caused by the speeding trains.

“There are still cracks here. You can see here (pointing to a crack at the verandah that leads to the front door of her house). Come inside, there are many more cracks. HOw many times are we supposed to carry out repairs? she asked.

Her husband, an emotional and exasperated Michael D’Souza, who is 78 years old, holds a large chunk of coal that fell into their compound from the coal-laden wagons that pass their house regularly.

“This is not the first time this has happened. Is coal supposed to be falling off the trains like this? Do you know how much harm it has caused us? Look at the dust pollution. Look at the state of our balcao and garage that is covered in dust. The next time this coal may fall on our heads if we happen to be standing in our compound. Still nothing will change,” Michael remarked.

When asked if anyone from the government or railways has come to check on this or enquire about how they have been affected by the trains, Michael replied stating that they have tried to bring this to the attention of the authorities but to no avail.

“We have only received notices of land acquisition. We have such a small space of land and that they want to grab this too. We had to go for the hearings all the way to Vasco during the Covid pandemic. The matter is still not over and this troubles us greatly. It is heartbreaking to consider that this ancestral house of mine where my parents and others lived will have to be torn down,” Michael added.

If their land is acquired  for double tracking, their house will be partially demolished wherein they will only be left with the space of the house where their kitchen is situated.

“It looks like they will stop at nothing to take our houses. Even if we die here trying to protect our house, they will still go ahead. Our quality of life has already taken a beating. Our trees and plants are affected. But this is still our home. Where will we go and why should we leave?,” said 73-year-old Anthony D’Souza, who lives next door.

Anthony, Michael’s brother added that the houses in the area have all got such notices for their land to be acquired

“If double tracking happens it won’t mean just double the problems. The issues we face will increase exponentially. There will be more trains passing by and at greater speed. If we thought living near these tracks was a nightmare, you can imagine how bad the situation will be later,” Anthony added.

Incidentally, Anthony has built a walking ramp to get on to the tracks, which is higher than the surrounding ground level and he needs to cross the tracks to get to the other side. The railway authorities are objecting to him having this walking ramp which is in his own property.

Orville Dourado Rodrigues, founder member of Goencho Ekvott that has been helping these families with their land acquisition proceedings, said the railways had recently tried to fill the area between their houses and the tracks with stones but they stopped such an activity.

“These families are fighting for their survival every single day. Is this what they should be doing at this age! We had invited Chief Minister Pramod Sawant and Environment Minister to come and spend the night here at their houses free of charge. Let them experience the hardships these locals have to endure,” Rodrigues added.

As Herald was leaving their house, another train passed by but this time it was a passenger train with low occupancy. When the toilet section of the train passed their houses, it left such a horrible stench, that all the locals gathered had to physically clamp their noses with their fingers to avoid that disgusting smell. A dejected Maria said it is either this or the air pollution caused by coal and they are so exhausted with all this, their only hope is that the double tracking project is dropped and the authorities instead address their existing grievances first.