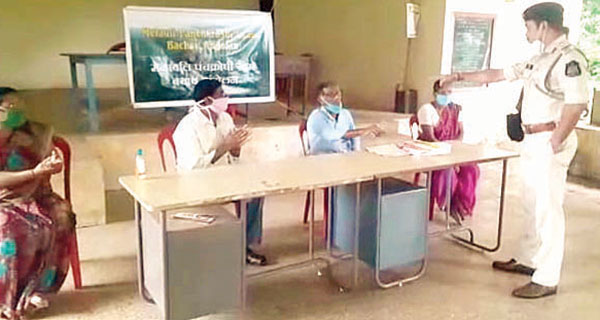 Four persons were sitting on the dais following norms of social distancing and were about to start the media briefing, when Valpoi Police entered and stopped them. The villagers were threatened that they would be put behind bars if they addressed the media.

Later Valpoi police removed the conference banner and took the villagers – two women and two men – to the police van and whisked them away to the police station before they could commence the press briefing.

Valpoi Police Inspector Sagar Ekoskar said that the action was taken as the meeting was organised without taking requisite permissions. “So we detained the three villagers and warned them. Later on we released them,” Ekoskar said.

Villagers have been voicing their apprehension over the project since June this year, pointing out that the location is a biodiversity-rich area and the land is the only means of livelihood for many of them.

Health Minister and Valpoi MLA Vishwajit Rane reiterated that his government will go ahead with the IIT project. “The proposal for more land may come in the next cabinet meeting,” he added.

In August 2019 the cabinet had approved 10 lakh sq m of land in Melauli for the IIT project.