Merces arm of Atal Setu to be shut for one more month. Even 100 days wasn’t enough 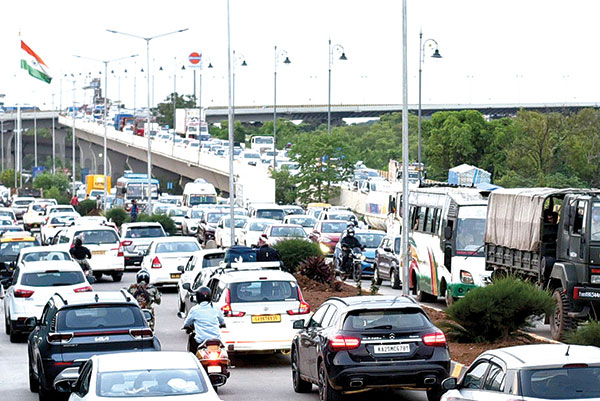 PANJIM: The woes that commuters travelling past Merces or Porvorim have faced in the last three months are set to continue as one arm of the Atal Setu (Northern side) will remain closed for another month. Last year in April too, the southern side of the bridge had to be closed to rectify the sinking of the approach road to the bridge where the ramps had started to show signs of asymmetry.

On Thursday evening, the District Magistrate, North Goa issued an order extending the closure of Atal Setu arm from Merces Circle with effect from midnight of November 21 and 22, 2021 till midnight of December 15 and 16, 2021 in order to carry out repairs at the Atal Setu arm. Officials at the Collectorate

office said this work was for the undertaking work of overlaying/hot mixing from Merces circle to KTC bus stand.

The same arm was closed on August 12 for a period of 100 days for the same repair work. That deadline was to end on November 20. The closure of this arm had led to traffic snarls at the Merces Circle, Divja Circle and also for traffic moving to and from Porvorim side.

Speaking on the issue, PWD Minister Deepak Pauskar blamed the unseasonal rains for the delay but rejected opinions that there were major flaws with the bridge given the multiple repairs. The bridge has seen multiple closures due to potholes and water logging issues.

“This is maintenance work which is being taken up by the contractor Larsen & Toubro (L&T). There were some issues with the carpet area which is being fixed. There was also work underway on the side that connects the end of the Atal Setu bridge to Divja Circle. But it is not like the bridge is in a bad condition. After this, the bridge will be perfect. The work just needed some extra time,” Pauskar said.

He added that the Goa State Infrastructure Development Corporation (GSIDC) is supervising the ongoing repair works.

He also emphasised that the bridge is in a good condition and pointed out that the signature cable-stayed bridge has a guarantee of 100 years.

Traffic police officials added that they will continue to man the traffic as they have been until the arm of the bridge is thrown upon for the public. They also cited the increase in the number of tourists visiting the State as part of the traffic problems.