Minister Lobo raised objections against including Old Goa in GPPDA 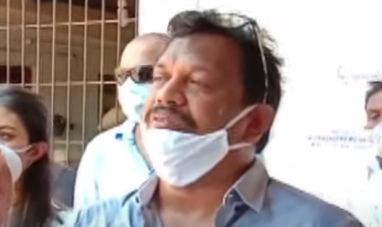 Before the decision had been taken by the State government to scrap the proposal to include Old Goa area into Greater Panjim Planning and Development Area (GPPDA), Minister for Ports Michael Lobo on Tuesday called on the Chief Minister Pramod Sawant raising his strong objection to the decision to include Ella village of Old Goa under GPPDA. The Town and Country Planning (TCP) Board during its meeting held last week, resolved to include the village under GPPDA as requested by the Old Goa Panchayat. The decision had been strongly criticized by political leaders as well as the villagers, who alleged that they were not taken into confidence. Speaking to media persons post the meeting CM, Lobo said that the CM has assured not to include the village under the planning area. “The Chief Minister was not aware about the issue. After I pointed out to him the seriousness, he called TCP Minister (Chandrakant Kavlekar) and directed that the decision be withdrawn,” he said. Lobo said that Old Goa is a historic village housing the world heritage sites as identified by UNESCO. “As a Goan, it becomes our duty to protect the historic site,” he said.  Earlier on Sunday, former TCP Minister and Goa Forward Party (GFP) president Vijai Sardesai had written to UNESCO seeking their intervention to Save Old Goa. Union Minister for Ayush Shripad Naik, too, had raised his concern over the TCP decision. Meanwhile, the Old Goa villagers had earlier written to the village panchayat demanding to call for a Special Gram Sabha to discuss inclusion of their village into GPPDA. “The proposal sent to TCP by the panchayat was without any gram sabha resolution. We strongly condemn it and oppose it,” a villager said addressing a press conference that was held much before the decision taken by the State government on Tuesday evening.

He pointed out that rampant development along the sides of the World Heritage site has already disturbed the protected monuments. “Any further expansion will lead to destruction,” he said. Historian Prajal Sakhardande warned of possible de-notifying of the Sites from UNESCO world heritage list, with its inclusion in GPPDA. “As per rule, within one kms of the protected area, there cannot be any development. This rule has already been violated and the buffer zone has been reduced. Any further expansion of the planning area, will lead to destruction,” he said.