Damage wires of the CCTV cameras to avoid being captured while committing the crime; Search operation leads to the recovery of the ATM machine without cash and a vehicle 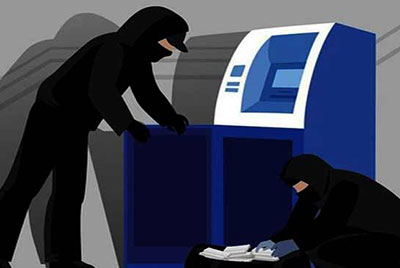 PANJIM: Nearly a month after ATM skimming racket was busted by the North police team, a case of ATM theft was reported in the intervening hours of Saturday-Sunday. The ATM containing cash of around Rs 19.38 lakh was looted by the unknown miscreants, who had damaged the wires of the CCTV cameras to avoid being captured while committing the crime.

As per a complaint filed by the Manager of Union Bank of India, Porvorim Branch Prabhavati Hegde, the incident occurred between 9 pm of October 17 and 7 am of October 18.

The Porvorim Police said they are rounding up suspects while also trying to get leads from CCTV grabs in the nearby locations. A search operation led to the recovery of the ATM machine without cash and a vehicle.

The case reportedly has similarities to another ATM theft reported at Pernem. Last year, four Russians were arrested for stealing Rs 9 lakh by breaking open ATMs across the State. They would use gas cutters and explosive substances to break open the machines; and also disabled the CCTV cameras.

Last month, the North Goa police teams had clamped down on an international ATM skimming racket with the arrest of at least five Bulgarian nationals, responsible for the theft of several lakhs of rupees. The raiding teams had seized around 382 magnetic cards - illegal in foreign countries - as skimmers were also known for procuring these through e-commerce websites.

As per a national survey, ATMs across the country have already suffered loss of around Rs 54 crore until earlier this year. To curb the rising incidents of ATM robberies, the Reserve Bank of India had in 2019 issued a circular for stepping up security measures for ATMs.

In its directive, it sought that all ATMs are to be operated for cash replenishment only with digital One Time Combination (OTC) locks and that these are to be grouted to a structure such as a wall, pillar, floor, etc, except for ATMs installed in highly secured premises such as airports, etc, which have adequate CCTV coverage and are guarded by State or Central security personnel.

The circular had also stated that the banks should work out a comprehensive e-surveillance mechanism at the ATMs to ensure timely alerts and quick response. 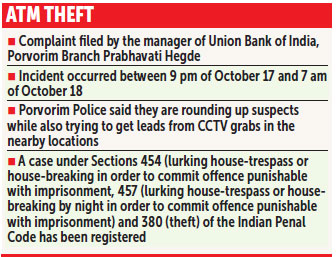