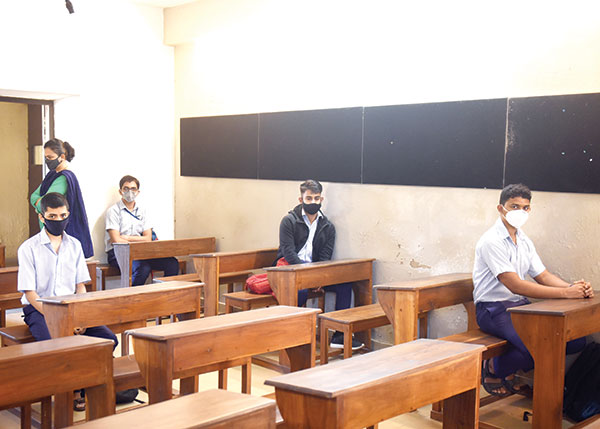 PANJIM: The partial reopening of schools on Saturday, nearly six months after the Academic Year 2020-21 commenced, amid the COVID-19 pandemic, evoked mixed response from students of Classes X and XII. The school managements are expecting good or full attendance from Monday’ while they assured to continue with online classes. 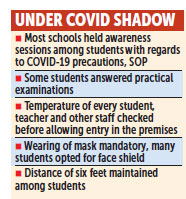 Students who turned up, however, appeared to enjoy school after the long shutdown. On the other hand, worried parents were seen waiting outside the school, during the class hours, just in case of any emergency as well as to pick up their wards after the classess ended.

On Day 1, while most of the schools held awareness sessions among students with regards to COVID-19 precautions and the Standard Operating Procedure (SOP), some students answered practical examination.

Classes resumed with schools following the SOP, wherein temperature of every student, teacher and other staff, was checked before allowing entry in the premises. While wearing of mask was mandatory, many students opted even for a face shield, just to be on safer side. A proper distance of six feet among students was kept.

Dr KB Hedgewar High School headmaster Vilas Satarkar said the response was limited but students as well as parents were satisfied and confident with the safety protocols. “We will have to wait and see the response in the coming days. Along with offline classes, online classes will also continue,” he said.

While a majority of the city schools reported low attendance, village areas saw 60 to 70 per cent students attending classes, with much enthusiasm.

“We had only 40 per cent students in both the classes – X and XII. Due to low response, no proper classes were held but students were informed about safety measures and a kind of revision was done,” a teacher at a schooll at the Cujira complex said.

The teacher further said that most school managements are expecting better attendance from Monday. “We will review the situation in the coming week. Based on the response, further decisions will be taken. But online classes will continue,” the teacher explained.

As managements were given liberty to adopt an odd-even formula for classes or running it in shifts by reducing duration, some schools called students in batches on alternate days. This was also due to limited space.

“Today we had called only one class and there was 50 per cent response. Next week we hope that this response will increase when parents and the students gain confidence,” Bicholim’s Progress High School headmistress Surekha Desai said.

Sharada English High School, Marcel had classes in shifts for Class X. The classes were held in the morning as well as in the evening, with 12 students in each class. “We have worked out the time-table accordingly and teachers are also working in shifts,” the headmaster said.

An official at the Directorate of Education said that the response, which was mixed, was as expected. “We had to start somewhere. It may take a little time to develop confidence among parents and students. Schools are directed to ensure that along with offline classes, online too continue,” an official said.

Though there are safety concerns among parents in view of pandemic, they too remained divided. While some felt that it is good to make a beginning, there were others with view that government should have waited till December end.