In response to a petition alleging unregulated transportation of ore, AG informed that the trucks are fitted with GPS through which constant monitoring is being carried out 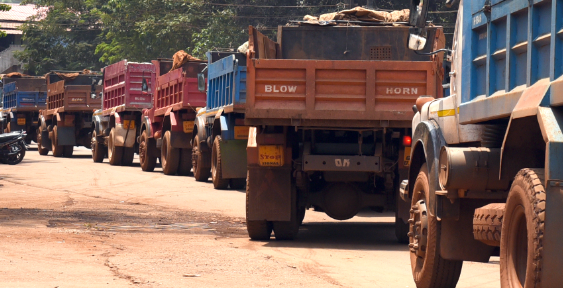 PANJIM/Sanguem: The State government has said that authorities are constantly monitoring the trucks carrying mineral ore in the Caurem-Curchorem-Savordem stretch.

In response to a petition filed before the High Court of Bombay at Goa alleging unregulated transportation of ore, Advocate General Devidas Pangam further said that the trucks are fitted with GPS through which constant monitoring is being carried out.

The government however sought time to respond to the petition, to which the court granted time latest by May 26, 2020 and adjourned the matter for next hearing on May 28, 2020.

The petitioner has made Chief Secretary, Director of Mines, Goa State Pollution Control Board, Collector South Goa and Superintendent of Police (South) as respondents in the matter. Two mining companies who are involved in the transportation of the e-auctioned ore are also made parties to the petition.

The petitioner claimed large movement of trucks carrying mineral ore in the Caurem- Curchorem- Sanvordem areas much against the framed rules and regulations which needs to be adhered in the transportation of the e-auctioned ore. It also emphasised on the plight of the tribal villagers living in the Caurem village and hardship faced due to the issue.

It is pertinent to note here that since the commencement of transportation activity, the roads along the mining belt are choked with the mining trucks causing heavy dust and air pollution. The Federation in its petition also pointed out health related problems due to unregulated transportation of mineral ore.

The petitioner also levelled against the mining companies for flouting all laid down procedure in their quest to transport maximum ore by end of June 30 which is the deadline fixed by the Supreme Court for transportation of the ore which was extracted prior to March 15, 2018.

Much recently the villagers residing at Kalay Sanguem had also complained of large scale transportation of ore by the truckers allegedly without following the guidelines framed by the State authorities.

While Collector South in its Standing Operating Procedure has stipulated the plying of 25 to 30 trucks in an hour, the ground reality in the mining belt is totally different and this has led to the Deputy Collector Sanguem and Quepem to convene meetings of those associated with the transportation activity recently. However, things had not changed much since then. The movement of trucks in excess of the prescribed limit continues to be the order of the day, claim residents residing in the mining belt areas.