Move to usurp Comunidade land was taken before elections 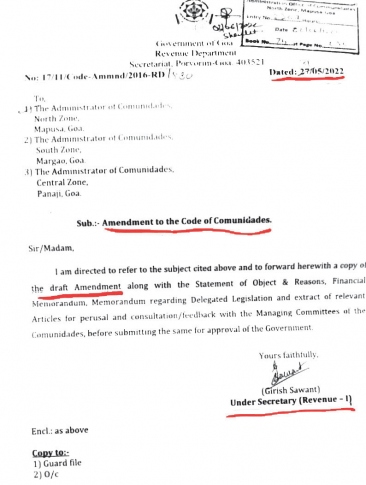 PANJIM: While Revenue Minister Atanasio `Babush’ Monserrate has claimed there was no move to amend the Code of Comunidades, the government had plans to amend the Code before February 14 Assembly elections and had even drafted the proposed Goa Legislative Diploma No 2070 dated 15/4/1961 amendment Bill in January this year.

A copy of the draft amendment Bill which is in possession of Herald, shows the name of then Revenue Minister Jennifer Monserrate as it was drafted in January last year, 12 months before the Assembly elections, thereby giving enough indication that the government wanted to amend the Code by inserting three draconian amendments, spend time over it (including the COVID period) and then waited for the Assembly polls to get over before making the move public.

Also, a circular dated May 31,2002, signed by under Secretary (Revenue-I) Girish Sawant has already been sent to respective Administrators of Comunidades asking them to submit their feedback to proposed amendments within seven days. This has proved the current Revenue Minister, who claimed he was unaware of the move wrong, even  he did a volte-face on Thursday stating that the amendments were to do with gender discrimination in the Comunidades. It was much more than that

These amendments have been termed by all

Comunidade bodies and legal experts are “dangerous’ and ‘draconian’

The Bill further provides for procuring/acquiring land for government projects with consent of managing committee for public purposes. With most of the Comunidades functionally defunct, this is likely to be a mere formality in most of the cases. For instance, in South Goa only 23 of the 90 Comunidades are functioning.

The amendment also seeks to acquire land up to 5000 square meters for public projects without the consent of Comunidade. This is an open license to take over virtually any land  including multiple parcels of just less than 5000 square meters without any consent whatsoever

The Bill also provides for regularisation of encroachment on government land constructed without a cutoff date. In 2011 it was proposed that the cut-off date for making illegal encroachments legal (which itself is wrong) as June 15 2000. In the present amendment, no date has been given. The section “Prior to” has been left blank which means illegal encroachments up to even today can potentially be regularised

However, the BJP government did not make the amendment bill public fearing public outcry ahead of Assembly elections, and did it now on the eve of the monsoon session of the Assembly to get the amendments passed now.