MARGAO: While there are constant complaints that the government has not given adequate powers to panchayats, the clamour to be either the sarpanch or deputy sarpanch appears to be very prevalent in Salcete as 69 sarpanchas and 47 deputy sarpanchas held office for the last five years in the taluka’s 30 village panchayats.

Significantly in only six panchayats in Salcete the elected sarpanch and deputy sarpanch completed the full term of five years without any change and they are the panchayats of Velim, Dramapur-Sirlim, Telaulim, Camurlim, Betalbatim and Orlim.

Of the remaining 24 panchayats, in 19 panchayats the changes in the office were due to an understanding amongst the elected panchayat members to occupy these positions by rotation.

The highest number of sarpanchas in the last five years in the taluka were in Varca and Rumdamol-Davorlim panchayats, where six persons occupied that chair. Incidentally while the sarpanch kept changing at Rumdamol-Davorlim, it had only one person namely Madhukala Shirodkar as the deputy sarpanch for the five years. 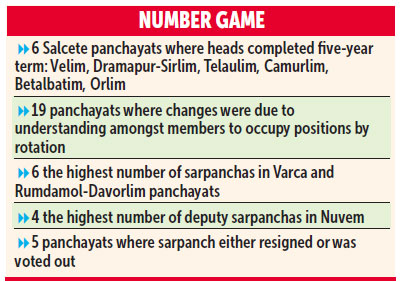 That women too were willing to participate in this sharing game was seen in Davorlim-Dicarpale which though reserved for lady sarpanch had five different sarpanchas. In fact after Flancy Gomes was voted out as sarpanch four other ladies occupied this chair by rotation following a mutual agreement.

Nuvem panchayat had the highest number of deputy sarpanchas as four persons were elected to that post. At Davorlim-Dicarpale, Selaulim, Cana-Benaulim and Varca three persons got to be the deputy sarpanchas.

Given this game of musical chairs, former sarpanch of Raia, Xavier Fernandes, has asked Panchayat Minister Mauvin Godinho to fix some criteria for an elected panch to become a sarpanch or deputy sarpanch and said some other States have already done this.

He said neighbouring Maharashtra has made education up to Class VII mandatory to become a sarpanch and also asked every person aspiring to be elected as sarpanch to issue a self declaration of having a toilet at his or her residence.

“Given the fact that Goa is an advanced State with a high literacy rate, I have asked that at least study up to the higher secondary be made mandatory to become sarpanch or deputy sarpanch,” he said.