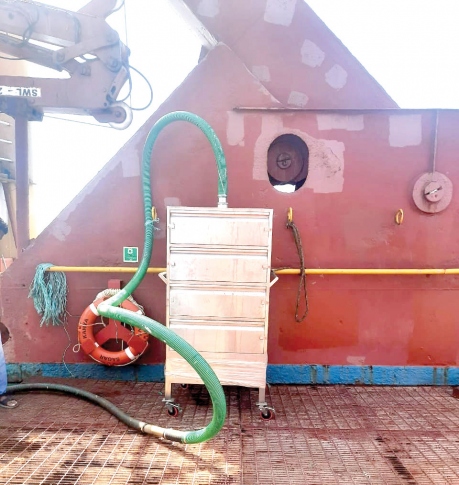 PANJIM: Microplastic pollution in marine waters around the globe is increasing exponentially, posing a threat to entire marine ecology and human race alike.

Considering the fact that ballast water released from ships is one of the major sources for dispersal of microplastics around the global oceans, an inexpensive solution has been devised by scientists at the National Centre for Polar and Ocean Research (NCPOR) Goa, which has the potential to reduce microplastics pollution drastically.

“Microplastics act as a source and vector for metals, antibiotics, toxic chemicals, pathogenic bacteria (Vibrio cholerae), and serve as ‘hotspot’ for the development and spread of multiple drug-resistant human pathogens. Ballast water released from ships is one of the major sources for dispersal of microplastics. We have proposed a screening chamber (with stainless steel three layered mesh) which can be attached to the existing Ballast Water Treatment Systems in ships to filter microplastics,” said Dr Ravidas K Naik, Project Scientist III, Biological Oceanography, NCPOR.

This technique is expected to remove a large number of microplastic particles (ranging from 0.0015 to 1020 million) from a single voyage. The proposed chamber may help to collect 0.0003-204 metric tons of particles per day, depending upon the geographical location of ballast intake in the global ocean.

This technology has been granted Indian patent and the details have been published in the Environmental Pollution journal. The team of scientists headed by Dr Naik comprised of Parthasarathi Chakraborty from Centre for Oceans, Rivers, Atmosphere and Land Sciences, IIT Kharagpur; Priya M. D’Costa from School of Earth, Ocean and Atmospheric Sciences, Goa

The idea of this technology originated while proof reading of a scientific manuscript.

“It struck me that considerable amount of microplastic is thrown back into the sea through the ballast water discharged by ships. I just thought, what we need to do is just add one filter at the discharge point of this water, so plastic particles will remain and seawater will go back to the sea. This would help mitigate the problem of microplastic pollution on a global scale,” Dr Naik said.

This filtration chamber is made up of marine grade stainless steel material and it works on the gravitational filtration technique.

“As a part of the existing ballast water management facilities on ships, back-flushed seawater along with organisms and particles larger than 50µm in size, flow towards the discharge point. Before getting discharged, the back-flushed seawater is proposed to pass through the following stages inside a three-layered screen chamber,” the NCPOR scientist said.

He said that this chamber can contribute significantly in some of the ongoing initiatives of the Government of India like’ Make in India’ and ‘Swatch Sagar Abhiyan’.