ONLY ONE HUNGER: Protect our heritage

Not politicians but ordinary Goans with extraordinary courage sit on hunger strike; Demand demolition of illegal construction next to St Cajetan’s church; Openly call out political elements backing the project 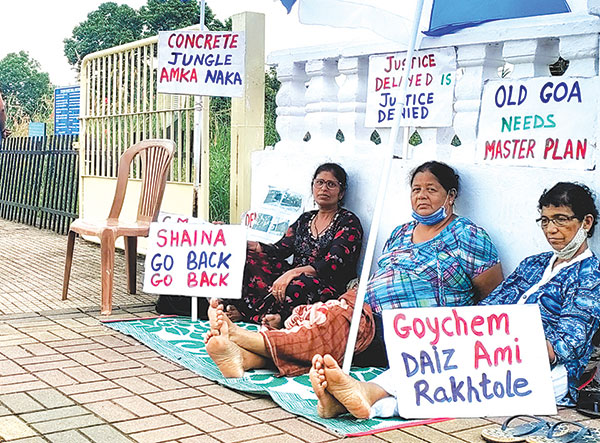 PANJIM: They came from all over, belonged to all age groups, some were fitter than others, and some appeared slightly frail, but each one of them had the will and never-ending strength of conviction to protect Goa’s heritage from the lobby of politicians and builders.

They began a hunger strike opposite the Basilica of Bom Jesus and in front of the Se Cathedral on Wednesday morning. They have been protesting the construction project, which has come up near a protected monument in Old Goa – the Largo of St Cajetan, Viceroy’s Arch, and St Cajetan Church.

The protestors also emphasised that they are adopting ‘Satyagraha’, a non-violent approach to their protests. They were referring to some calls that had been made by certain sections to take physical action against the structure and destroy it using force.

Local resident Glean Cabral said they will not withdraw the agitation until all the permissions and NOCs that were granted to the project are revoked. He also called upon the public to join their hunger strike and show solidarity with their cause of saving Goa’s heritage.

The strike saw the participation of people not just from Old Goa or surrounding areas but also from other parts of Goa.

Anthony D’Silva from Ambelim, Salcete, was one such person who joined and said that it was important to fight the project as if it gets completed, it would set a bad precedent that would threaten heritage structures across the State. Another lady said she had come to the site as a ‘Goemkar’ and to fight to protect the structure of international importance.

Ana Gracias from Chimbel pointed out that this is yet another protest that they had organised and lamented that people have to come to the street to protect Goa’s future and put pressure on the government to take the right steps.

Responding to queries from media persons about reports that the ownership of the project has changed, the local protestors said they were not aware of that and also pointed out that the work on the construction has not stopped and is instead going ahead with speed.

With the novenas in preparation for the feast of St Francis Xavier underway, the hunger strike drew the attention of the thousands of devotees who had visited the Basilica of Bom Jesus to attend masses.

---
CM feigns ignorance over project
Chief Minister Dr Pramod Sawant continued to feign ignorance over the controversial Old Goa project that has seen widespread protests over the last few months.
The CM, asked to comment about the recent protest held on Sunday, first asked where is this illegal project and what was illegal about it. When he was told again that it was in Old Goa, Sawant hinted that he does not think there is anything illegal but stopped short of saying that and added that he would have to see if there any illegalities, if at all. The CM was asked if he had received correspondence from the protestors but chose to ignore the question.
It may be recalled that the protestors had sought appointments with the Chief Minister and had written to him in detail after he had earlier said that he was not aware about the protest.
Earlier, Town and Country Planning (TCP) Minister Chandrakant Kavlekar had assured the protestors that he would take action after they had submitted a memorandum to him in person.
----
MP assures to raise project issue in Parl
MARGAO: South Goa Member of Parliament (MP) Francisco Sardinha on Wednesday assured that he will raise the issue of the construction project at heritage site at Old Goa in the next parliament session. Sardinha said he will personally bring the issue to the notice of the concerned Union Minister.
Addressing the media persons in Margao, he demanded that the services of the postmen working for the last 10 to 15 years be regularised.
"This issue pertaining to the construction project at a protected area in Old Goa is shocking. It is more shocking that the project belongs to a BJP spokesperson. We don't know what this government is intending to do, wherein the Town and Country Planning Department is also sleeping on the issue", he claimed.
He assured to raise the issue in the next session of parliament and to take up the same with the concerned Union Minister.
Highlighting the issue of MPT urging shack owners to take NOC from it, he urged the Goa government to discuss this issue in the Assembly, take a resolution and forward it to the parliament.
"The MPT should not go beyond its jurisdiction. The act of MPT is diluting the powers of the panchayats and municipalities with regards to the port limits", Sardinha said.
He urged the concerned authority to regularise the postmen of Goan origin who are in service for the last 10 to 15 years.
"The lower jobs, if not the higher positions, should be given to the Goans in the State. Goa should be totally isolated from others with regard to postal authorities,” he said.
The MP said this issue of postal authority will be discussed with the concerned Union Minister.
He objected to the interference of the Power Minister Nilesh Cabral into the inauguration of a MPLADS project in Curchorem.
"It is the right of the MP to inaugurate the project constructed under the MPLADS funds. And hence, the Chief Minister of Goa should guide his minister to stop interfering into the MPLADS projects", he urged.
Related news