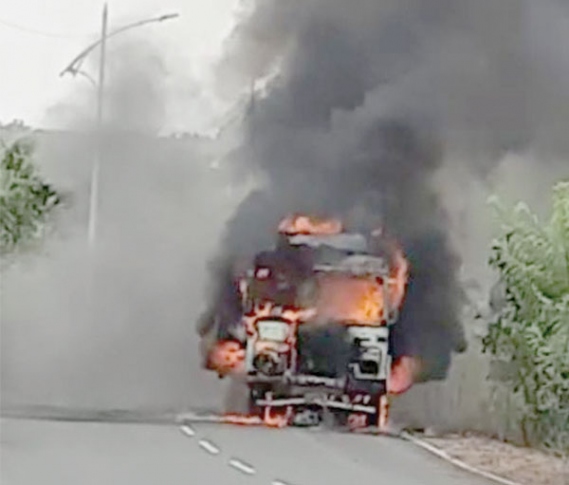 PONDA: In a tragic accident reported along the Kundaim-Marcaim bypass on Monday afternoon, 19-year-old rider Akash Usmane and  20-year-old pillion rider Ritesh Kudinur, both residents of Old Goa, died on the spot following a head on collision with a truck loaded with iron rods.

According to available information, the motorcycle rider Akash and Ritesh were on their way to Kundaim, when they collided with the truck proceeding to Marcaim. The impact was such that Akash and Ritesh died on the spot. Both vehicles were gutted as the motorcycle that got trapped under the truck was dragged almost 30 metres away causing sparks which led to the fire.

Passersby claimed that it was a horrific scene to witness both vehicles on fire and the bodies lying along the roadside.

A crane was pressed into service to remove the motorcycle from the site.

It is learnt that both the youth had gone for an interview at a factory in Marcaim and were on their way back home.

The Ponda Police conducted the panchanama and booked truck driver Ramboli Choudari, a native of Kolkata.

The bodies of both the victims have been shifted to Goa Medical College for postmortem and further investigation is in progress under the guidance of PI Mohan Gaude.

According to locals, the bypass has become an accident prone zone due the sharp turns. So far around six persons have been killed in the accidents reported along the bypass which was constructed few years ago. Besides the faulty road design, the locals have demanded that the roadside bushes be cleared immediately.