Oppn MLAs made to wait outside Mormugao Dy Collector’s office 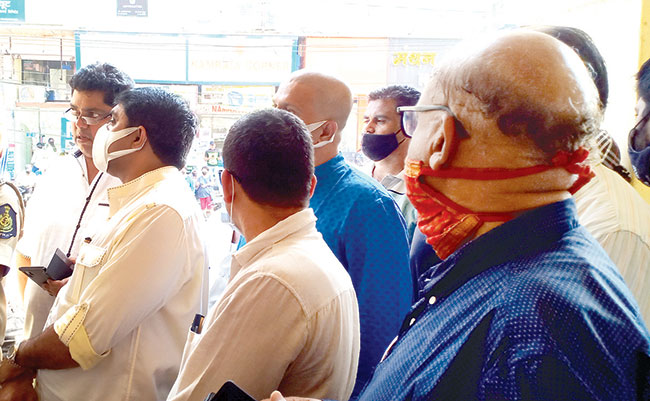 Vasco: Leader of the Opposition Digambar Kamat, Goa Forward Party chief Vijai Sardesai, Curtorim MLA Alexio Reginaldo, Saligao MLA Jayesh Salgaonkar along with Sanguem MLA Prasad Gaonkar who had come to visit the Mormugao Dy Collector regarding land acquisition under the Railways Act, were made to wait for over fifteen minutes outside the locked gates of the Dy Collector's office in the presence of police personnel on Thursday evening.

The legislators were made to wait outside as personal hearings were being held with regard to the land acquisition for railway double tracking.

Speaking to the media, Kamat said, "We could have been asked to sit in the office rather than making us stand outside the office."

completely and not in sections by using various Acts which is illegal.

"We met the South Goa Collector and informed her about this, she told us that she will consult with the Revenue Secretary and will examine it," Kamat said.

Kamat slammed the Dy Collector of Mormugao for keeping the legislators waiting outside his office for more than fifteen minutes and not accomodating them in his chamber.

He said he will take this issue with the higher authorities and will deal with it seriously.

Goa Forward Party chief Vijai Sardesai asked, why there is a haste for completion of the double tracking related to land acquisition when some legalities and issues need to be sorted out?

"When the elected representatives are coming to bring certain issues to the notice, they are being treated in an ill way, I feel this is being done on someone's instructions," Sardesai said.