Meet to chalk out programme for 60 years of Liberation gets postponed; Politicos say money should be utilised for revival of State economy 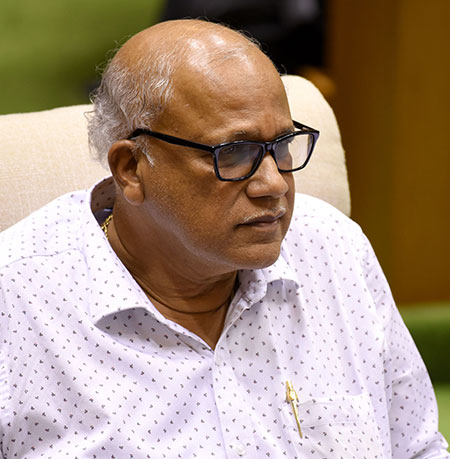 PANJIM: The meeting to chalk out the year-long programme to mark the 60 years of Goa’s Liberation from Portuguese rule was cancelled on Tuesday after the Opposition decided to boycott it. The meeting will now be held on Friday.

The Opposition has demanded that the event be scrapped in light of the State’s poor economic condition owing to the COVID-19 pandemic outbreak and the money be utilised for the revival of State.

In a letter to the Chief Minister, Kamat raised objections to notice of the meeting being sent to members of the organising committee just a day in advance that is on November 30. He also said that he was neither contacted nor informed about the inclusion of his name in the committee.

“It appears that the meeting convened on Tuesday is just a formality as the agenda of the said meeting is to approve the proposal submitted by the Department of Information and Publicity for the celebration of 60th year of Goa’s Liberation,” he said, adding that the proposal was also not enclosed with the meeting notice.

Kamat demanded that the Rs 100 crore package as sought from the Centre for the celebration be used for revival of the State economy and to help marginalised groups.

GFP also demanded that the celebration be scrapped. “The celebration is a waste of precious public money at a time when Goa’s economy is in a shambles, with the government borrowing to pay salaries,” GFP working president Kiran Kandolkar said.

He said the party stands by its demand that the celebrations be scrapped and the money be used to help rickshaw owners, motorcycle pilots, taxi operators and bus owners, who are badly affected due to the COVID-19 pandemic.

Kandolkar also said there is nothing to celebrate with the government pushing so many anti-Goan projects.

MGP’s Marcaim MLA and former Deputy Chief Minister Ramkrishna (Sudin) Dhavalikar urged the Chief Minister to avoid unnecessary expenditure on the celebrations and instead use the amount for the downtrodden who have been hit by the pandemic.

“Spending Rs 100 cr at this juncture defies logic. CM has to look at the financial condition of the State and the country due to the pandemic,” Dhavalikar said.

He said the 60th year is very important for Goa and President Ram Nath Kovind coming to Goa for the 59th anniversary is great news. “I welcome him but instead of spending huge money there should be celebration in all 12 talukas,” he said.

He added that during 50th year of Liberation, the State had announced funds to municipalities for development projects but for last 10 years the projects have been left incomplete.

“Instead of wasting money we need to complete these projects. Motorcycle, taxi, bus and autorickshaw owners, etc, need to be supported by the government during pandemic. We do not need to go out of Goa and make others aware of Goa’s Liberation,” he said.

Dhavalikar said if the Centre is giving money the State should take it and spend on the people of Goa.

As a mark of celebration, the State plans to organise at least one programme in the capital cities of various States and Union Territories to showcase Goa’s culture and tourism. 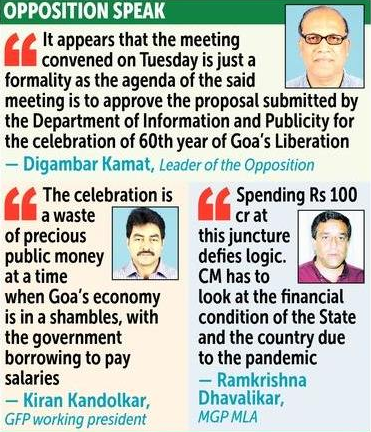