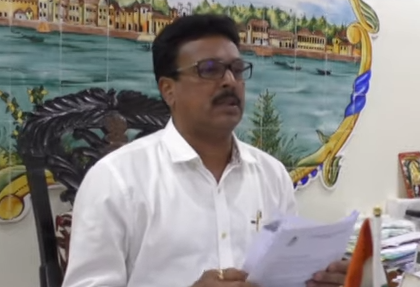 The ongoing stint of Panjim City Corporation Mayor Uday Madkaikar is expected to be his last one, as BJP MLA Atanasio ‘Babush’ Monserrate is set to promote Madkaikar’s son Adhvay during the upcoming Corporation of City of Panaji (CCP) elections, which are likely to be held in March.

Speaking to media persons, Monserrate said that he is committed to give 80% new faces in the coming CCP elections.

“I have told the Mayor not to contest the poll as I will be promoting his son from my panel,” Monserrate said in presence of the Mayor.  The uncrowned king of CCP, added, “This election is going to be a challenge for me. I am confident that BJP will win all 30 wards,” he said.

Monserrate entry into BJP in 2019, less than two months after being elected as the MLA, gave a major twist to the political dynamics within CCP. Monserrate has been fielding his panel against BJP since the last two decades.

The BJP MLA has had a tough time to work out equations, to ensure that the loyal saffron party members get an equal share in the council.

The BJP leader said that he is waiting for the authorities to complete the delimitation and reservation of wards to announce the candidates.

In the meantime, the Department of Urban Development has asked the Tiswadi Mamlatdar to complete the process of rationalisation of 30 wards by January 19.  The process of rationalisation of wards has to be done on the basis of equitable distribution of population or voters and geographical contiguity. Meanwhile, the CCP  cleared all the illegal encroachment in the market premise and also undertook a cleanliness drive.

CCP Market Committee Chairperson Shekhar Digvekar said that the drive was undertaken following directions from the Directorate of Food and Drugs Administration (FDA).  “The FDA conducted an inspection of the market premise and had accordingly asked us to undertake cleanliness and to clear the encroachments,” he added.