Ribandar, which falls under the CCP, lacks civic amenities like super market, playground, crematorium, etc, despite the locals paying hefty house tax for the past many years 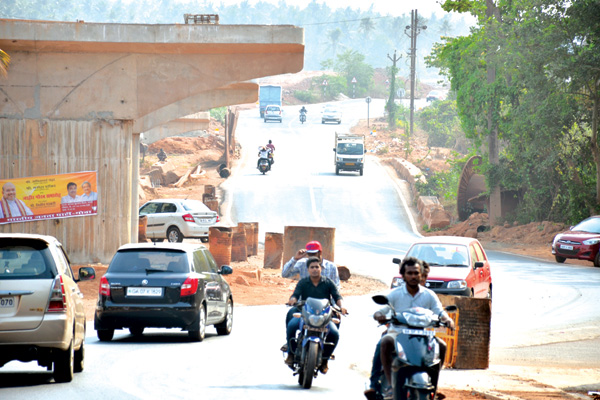 The centenary celebrations of one of Ribandar’s most famous and loved sons, the gentle doctor and theatre artist, late Dr Sanvlo Keni were held at Kala academy on Monday evening. But the condition of his beloved Ribandar is giving its residents no cause for celebration
Ribandar may be part of the Corporation of City of Panaji (CCP) but as far as overall development and civic amenities are concerned, it remains completely neglected and in a crumbling state despite the very high municipal taxes that locals have paid in the past many years.
Ribandar has, for decades, been demanding a football ground, a community hall and a proper market but it is very agonising that these long standing demands of the locals are yet to be fulfilled.
As Team Herald visited the place, it was revealed by the locals that ward No 30 of the CCP in Ribandar, which is just 5 kms from the capital city of Panjim, has conveniently remained neglected over the years.
“While there is no football ground or a hall, there is no proper crematorium even for the dead to rest in peace at Ribandar. Always before elections, tall promises are always made but after being elected, Ribandar is always neglected...now with Parrikar coming back, we expect something good will happen”, said Mariano Fernandes, a local resident.
Locals have informed Herald that there is lack of proper sanitation across Ribandar, as the garbage is just strewn all over. Others, meanwhile, say that erratic power and water supply are the other main issues while also stating that Ribandar has had many talented footballers but lack of a football ground has been a hindrance in nurturing the talent amongst potential footballers.
“During Churchill Alemao’s tenure as the PWD minister, acquisition was in process for an extra overhead tank due to the rising water demands but suddenly in the new ODP the zone the plan was changed from S2 to C1 and since then the project has been stalled. The government is talking about smart city but we as the people of Ribandar only say that necessary projects be carried out before on priority,” said former CCP Councillor Ward No 30, Vivian Nasnodkar.
During a casual chat with the locals, they demanded that grievances of the local people need to be redressed at Ribandar itself without the people having to travel with their problems to an already very congested Panjim city.
Another resident, Nagesh Suthar had this to say “Ribandar being so close to Panjim lacks a children’s park and a garden as currently locals have to travel all the way to Panjim, which is not possible on a daily basis. I think the government should do something as Ribandar has been neglected for the last many years. Also garbage is strewn away and there is lack of water and power supply.”
Meanwhile, Advocate Aires Rodrigues said, “while our MLAs and Municipal Councillors have risen from rags to riches, Ribandar has remained in the dumps.”
“Our MLAs and Municipal Councillors have risen from rags to riches, Ribandar has remained in the dumps... in August we were promised that within three months medical services and facilities would be available at the old Goa Medical College Hospital in Ribandar. But those assurances are all ending up like China made goods,” said Rodrigues.
"The CCP corporator from ward No 30 is trying his level best to develop gardens and other facilities; there are no places earmarked like in Panjim we have a lot of spaces. The Panjim MLA should look into the matter in what can be done," said CCP Mayor Surendra Furtado.
Related news