Accused, a neighbour has allegedly built an illegal compound wall; Has history of harassing the parish priest and his predecessor 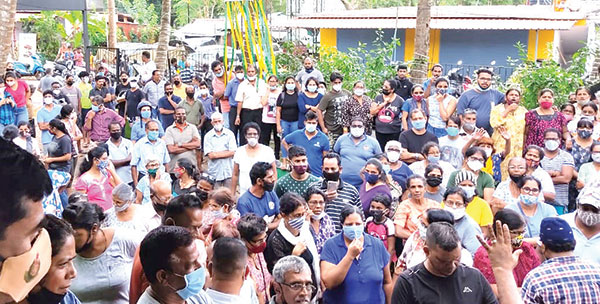 According to Saligao Police, Fr Mateus Rodrigues (60), Parish Priest of Mae de Deus Church, Saligao filed a complaint on Monday afternoon at around 12.37 pm, that the accused Joseph Gerald D’Souza (66), a resident of Pequen Morod at Saligao wrongfully restrained him, further assaulted him with fist blows on his face, abused him with filthy language and threatened with dire consequences over the issue of dumping mud in the field.

As the news spread like wildfire, shocked and angry villagers from Saligao and neighbouring villages rushed to the Calangute Police Station shouting slogans and demanding justice. The police defused the situation by quickly arresting the accused.

The incident occurred near an electric transformer located in front of the Saligao Church. Later, on receiving the news, the people gathered at the police station demanding action against the accused.

Noted politician Wilbur Ticlo said, “Parish priest is representative of village and institution and nobody has the right to touch him. I condemn this act”.

Calangute MLA Michael Lobo and Saligao MLA Jayesh Salgaonkar also visited the police station. Lobo said, “We have asked the PI to immediately file a charge sheet and a message should go wide and clear that nobody has the right to touch or argue with parish priests or anyone related to any religion”.

Tulio D’Souza, another local politician said, “The accused trespassed into the church property and assaulted the priest. This person has been trying to create chaos and disturb the peace of the village. If the police fail to take appropriate action, then people will be forced to take law in their hands”.

The locals gathered at the station demanded police protection for the priest.