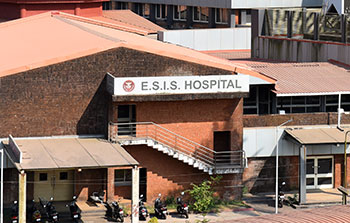 Margao: Alert residents of the ESI hospital quarters raised an alarm after they noticed a COVID patient trying to escape from the COVID Hospital at Margao.

It is learnt that the patient was to be discharged on Saturday but he attempted to exit the hospital from the back door before the formalities were completed. However, he was taken back and later discharged after due procedures.

Onlookers said that there was no security personnel at the door.

Colmorod resident Savio Coutinho said there are doors behind the COVID Hospital, through which the patient tried to get out.

"The security guard posted at the door was not present. When the guard was questioned regarding the lapse, he said that some patients had come out from the front gate as well," Coutinho alleged.

Sources said due to the lack of staff at the hospital the security personnel are asked to carry out hospital duties. It is also believed that some patients have even attempted to leave from the front door but were stopped.