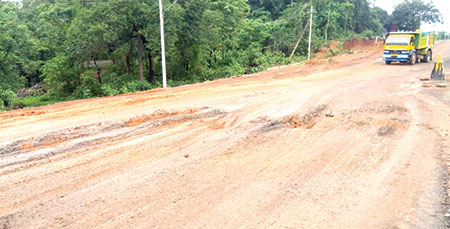 Pernem: The highway stretch between Patradevi and Porascadem is posing a danger to the lives of motorists. The concrete on the top of the road has been washed way during the roads leaving the stretch muddy and slippery.

It can be recalled that over 20 persons have lost their lives while many others have sustained major injuries with the expansion work being blamed for the accidents.

Pernem locals have even protested against the authorities and contractor concerned and blocked the highway several times where they demanded that the necessary steps are taken to avoid such accidents from taking place and to reduce the number of fatal mishaps.

Locals however allege the authorities have taken their lives for granted and work is underway without meeting their demands.

“The upper layer has washed out in the rain water. Now the muddy layer is left and is dangerous specially when it rains heavily and it gets difficult to see where the road is exactly and where its borders are. There are no sign boards or anything for people to know that the road is in dangerous condition. Also during the last few days when there was no rain, the contractor concerned could have put layer of concrete but he failed to do so. Now the road has become muddy and slippery,” said Hemant Mandrekar.

Another daily commuter Deva Naik said, “It is dangerous to ride on this road especially when it’s raining and heavy vehicles pass by. The road has turned slippery.”