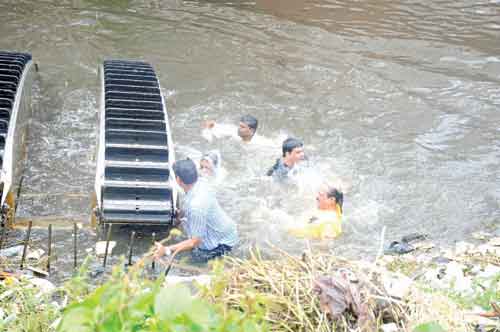 PANJIM: Panjim Police have begun investigating the St Inez Creek mishap that saw seven persons, including Panjim Mayor Surendra Furtado, falling into the water during a de-weeding demonstration on Sunday.
Police Inspector Siddhant Shirodkar said the persons aboard the de-weeding machine are being summoned for questioning as part of the preliminary inquiry, depending on which further action will follow.
“Statements of all seven persons will be recorded from tomorrow (Tuesday) onwards. If there are any injuries, we will send them for medical examination. If there are any damages to the machine or other properties as a result of the accident, we will register an offence,” he told Herald. The State took cognizance of the matter immediately after the incident on Sunday afternoon.
Meanwhile, the mayor said, “Let the law take its own course.”
Sources said that according to the machine operator the de-weeding machine can take just two people at a time.
Furtado and six others, including a video journalist, had fallen into the water when the machine capsized due to overloading. All escaped unhurt but the mishap damaged some electronic devices. The machine operator had initially demonstrated the de-weeding process after which the Mayor along with others boarded the vessel to witness it. However, after floating a little distance and at the time of clearing the dumped waste, the vessel capsized.
Meanwhile, lawyer-activist Aires Rodrigues filed a complaint against Furtado for acting recklessly and endangering the lives of others. Panjim police have not registered this as the State complaint on the same offence is already being investigated.
Related news