Villagers allege that Police Inspector stamped on the chest of a woman; 10 policemen injured

VALPOI:  Police resorted to a lathi charge and protesting Shel-Melauli villagers pelted stones on the cops, as the anti IIT agitation took an aggressive turn on Wednesday.

For second day consecutive villagers of Shel-Melauli kept up their protests against the IIT Goa project. Villagers continued to disrupt officials carrying out demarcation work at the site.

Following the hard line approach of the villagers, of not allowing the officials to enter the forest, the police started a lathi charge.

Women from the village also alleged that Police Inspector Sagar Ekoskar stamped on the chest of a woman who was protesting. Following the incident, the villagers started pelting stones on cops.

After the lathi charge the police left the village. Policemen who were injured during the scuffle with the Shel-Melauli villagers were taken to the CHC Valpoi.

After the lathi charge villagers of Shel Melauli and Dhamshe marched towards the Valpoi Police Station.

Around a thousand villagers sat near the police station blocking the road demanding the immediate suspension of PI Ekoskar for insulting an elderly woman during the scuffle.

The villagers also demanded that the Chief Minister visit them and give an assurance and suspend the PI.

The villagers of Shel Melaulim received a shot in the arm after they got the support from Dhamshe villagers, who joined the protest at Valpoi Police station. Villagers blocked the Valpoi town main road for almost three hours.

However, at around 8.30pm the villagers dispersed but vowed to continue their protests and not allow the demarcation work to take place. 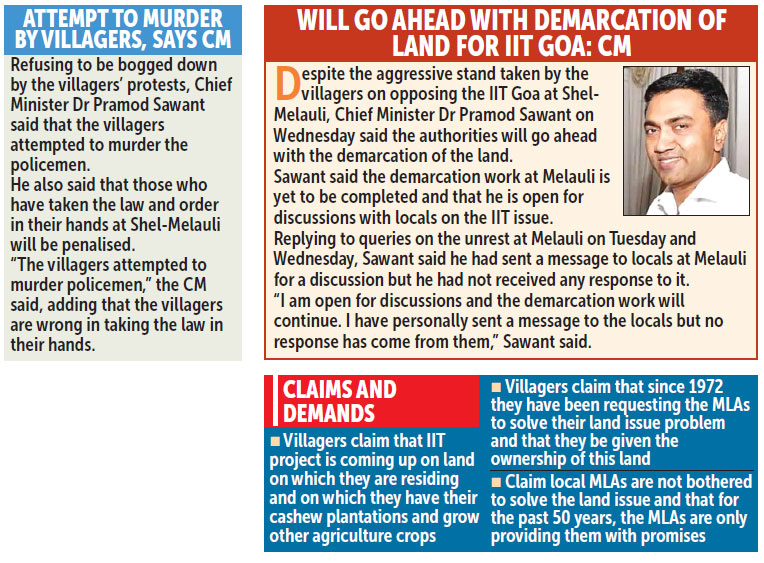