The group refuses to believe that the GWMC is only disposing of inert waste at the site, due to the unexpected stench from the dumped matter; they have also found big pieces of plastic 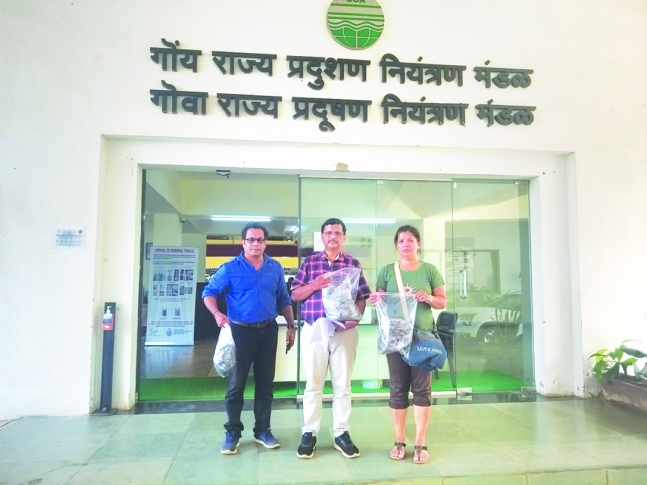 MARGAO: With the government brushing off their concerns over the alleged dumping of untreated, mixed garbage from Sonsoddo near the District Court in Fatorda, a group of citizens on Thursday took matters into their own hands by collecting the samples of garbage themselves and handing them over to the Goa State Pollution Control Board (GSPCB) for testing.

A group of citizens led by former MMC Chairperson Savio Coutinho travelled from Margao to the GSPCB’s office in Saligao with the samples of the dumped waste, which the Goa Waste Management Corporation (GWMC) claimed was remediated inert waste. “Since no such tests or analysis has been carried out by the GSPCB, we were compelled to collect samples of the so-called inert waste, so that the tests can tell us the

Reacting sharply to the statement of GWMC’s Managing Director Levinson Martins that all precautions were being taken while disposing of the bioremediated waste, the group that call themselves the Concerned Citizens of Margao and Fatorda that the chemical analysis of the three components- Compost, RDF and Inert be made public.

“Is inert waste supposed to contain the large pieces of plastic that we exhibited from the dumped material?” questioned Coutinho, adding that inert waste does not smell, and that too, a stench that travels across a one kilometre radius. “The stench is because the chemical and biological oxygen demand of the waste has not been complied with; it is proof that it is not inert,” he added.

“We have all the reasons to believe that Margao MLA Digamber Kamat, who had recently visited the Sonsoddo dump yard at the time of the re-commencement of the bioremediation, has blessed this dumping of screened mixed garbage. The fact that he made a statement to the media, taking pride over a similar dumping spree on the SGPDA ground 18 years ago, has confirmed this fact,” alleged Coutinho.

Apart from polluting the ground water table at the site, the SGPDA is also still struggling to maintain the levelling of the uneven ground, to facilitate parking, he said.

“Even the work for the development of the SGPDA ground is held up, due to the need to re-design the foundation at a huge