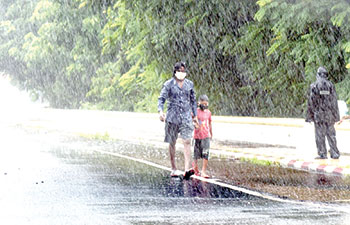 Panjim: For the second consecutive year, the month of July turned out to be wettest, with State receiving 51 inches of rainfall, almost 17% above normal, till its end. However, last year, the month recorded 23% surplus rains.

As per the data available from the Indian Meteorological Department (IMD) Goa observatory, from July 1 to July 31, State witnessed total 51.12 inches (1252.6mm) of rains; while the average normal rainfall during the period is 41 inches (1017.1). IMD said that the rainfall is 17% above normal.

June also saw massive rains. The month witnessed 19% excess rainfall for the season with total of 42 inches of rains.

Meanwhile, IMD has issued an Orange Alert for Goa with ‘very heavy rainfall warning’ between August 1 and 4, with rains exceeding 11.5cm in 24 hours. Rains are likely to be accompanied with winds of speed 30-40kmph.

IMD said that, the rainfall activity over Goa is very likely to increase from around August 1 onwards.

Strengthening of westerly winds at 1.5km and 3.1km above mean sea level and likely formation of a low pressure area over North bay of Bengal by August 4, is expected to bring heavy rains for the coast.

Fishermen have been advised against venturing into deep sea during the period.