Started in 2017 to replace 1000-km line for Rs 145 crore project short-closed by Power Minister on learning of faults; ABC has no automatic fault detecting technology; Complaints of ABC faults come from every part of the State, say engineers

PANJIM: The ambitious Aerial Bunched Cable (ABC) project in the State, laid at an estimated cost of 145 crore, has turned into a white elephant for the Electricity Department within three years of its implementation.

The department has slowly stopped replacing the aerial bunched cables in many areas with old conductors.

In order to resolve the issue of frequent power supply failure in remote areas, especially in forest areas due to falling trees on main lines during the monsoon, the State government had taken up the work of installing ABC in areas where underground cabling is not possible due to the lack of land.

The work on aerial bunched cabling started in 2017. Under the pilot project it would cover 1,000 kms of 11 KV line of power supply. The estimated cost of the project was Rs 145 crore. The Electricity Department was to also shift or replace 20,000 poles.

While the idea was good, what followed after implementation was not so good. Herald investigations revealed that from initial stages the ABC began developing faults and instead of solving the problems for the department added some more.

Today, the situation is such that there are complaints round-the-clock, at least three-times more than the old lines.

Engineers speaking to Herald on condition of anonymity said the project was implemented without application of mind.

Explaining the issues, engineers said that the end terminations fail very often throughout the State 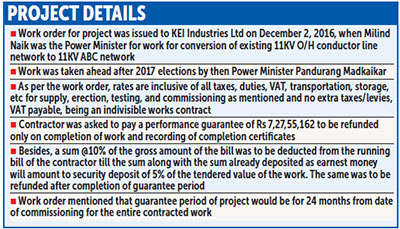 wherever the ABC has been laid. “Now the company, under the annual maintenance contract as per work order, is trying to replace them but what happens when the contract ends?” the engineers asked.

They said that even the smallest of faults takes eight to ten hours to be resolved. If the failure is at night, no work can be done and workers have to wait for the day to repair, they said.

Interestingly, they said, “The ABC technology has no automatic fault detection machine. One has to walk all along road for identification of fault, which takes a long time as some feeders are 30-40 kms long.”

Power Minister Nilesh Cabral when contacted confirmed that the ABC project has failed. “I realised as soon as I took over as Power Minister and I immediately asked to short-close the contract. They were supposed to lay 1,000 kilometres of cables and we restricted them to 672,” he said.

He said the government at least saved a few crores of rupees. “We have made payment of around Rs 100 cr. Right now ABC is under annual maintenance contract of the company and they have to repair it. In case they fail, we have the security deposit which will be encashed,” he added.

Cabral further said that underground cabling is the only solution for power cuts. “As of now the finance is an issue but we will take it up,” he said.