PORVORM: Amidst noisy scenes by the opposition benches on the Floor of the House, the government on Monday passed the State Budget 2020-21, with a total size of Rs 21,056 crore.

The Budget was passed even as the opposition demanded restructuring of the Financial Statement in view of the current COVID-19 pandemic, which has hit the State economy badly.

Leader of the Opposition Digambar Kamat had moved an “adjournment motion” in the State Assembly seeking a discussion on the COVID-19 pandemic, which was not admitted by the Speaker, following which the opposition benches rushed to the well of the House.

While the opposition, including members of Congress, Goa Forward Party, MGP and an Independent, continued pressing for a discussion on the adjournment motion, the government passed the Budget.

Chief Minister Dr Pramod Sawant, who also holds the Finance portfolio, had presented the State Budget 2020-21 in February, with a total estimated expenditure of Rs 14906.34 crore towards the revenue account and Rs 5069.32 crore towards the capital account.

The Government had opted for a vote on account for four months in February.

“But despite that, the government has managed to run the State,” he added.

However, Sawant said that the Budget that was presented on the floor of the House was an estimated one and it needs to be passed considering the requirements to tackle the coronavirus crisis and its management.

“In the last four months since March, the State government has not lacked anywhere in COVID management. We are completely transparent on the issue,” he said, as the opposition continued to press for their demand for a detailed discussion.

Sawant said that after the unlocking of the industrial sector, the State has been gaining revenue. “We are optimistic that the economic situation will normalise in the days to come. We will be able to review the infrastructural work so also recruitments in the departments,” he added.

The Chief Minister said he is not afraid to have a discussion on the Budget but this was not the right time as the urgency was to pass the estimated Budget.

Along with Budget, the Demands for Grants and Supplementary Demands were also passed. 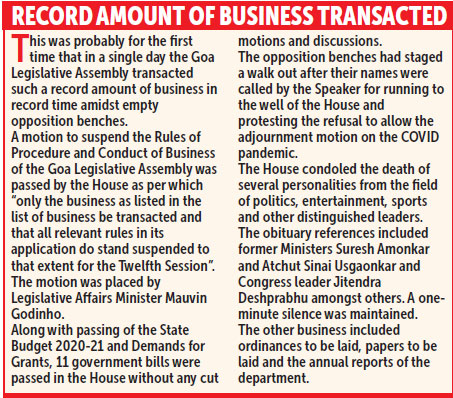