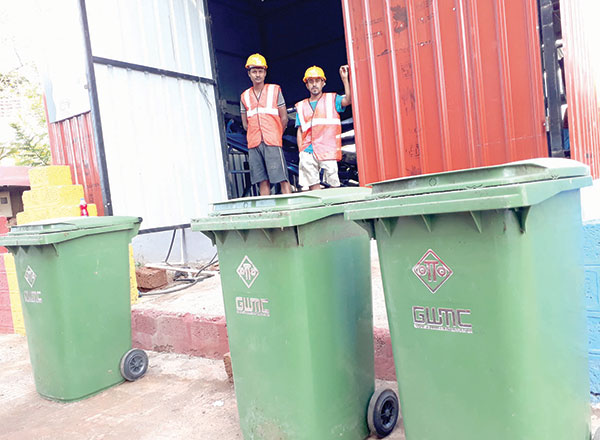 MARGAO: At the time people are struggling to get rid of the garbage, the newly installed 5 TPD biomethanation plant of Margao Municipal Council at South Goa Planning and Development Authority (SGPDA) is facing a tough time to carry out operations due to shortage of waste.

On the other hand, dumping of garbage including fish and food waste in the open fields close to the retail fish market of the SGPDA continues.

Herald’s visit to the plant and interaction with the concerned authorities revealed that the issue is not taken seriously at all and hence causing major harm and health hazard in the market area.

The workers at the plant informed that they are short of waste in order to put the plant fully operational. They only receive waste weighing below 1000 kilos, wherein the capacity of the plant is 5,000 kilos per day, but the officials of plant are of the opinion that they are still on the trial basis, despite 20 days past after the installation.

Shockingly, huge quantities of waste, including fish and chicken are witnessed dumped in the open fields close to the SGPDA retail fish market.

It is pertinent to note that 5 TPD biomethanation plant was inaugurated with a fun fare on November 4, wherein the Margao Municipal Council was the first in State of Goa to commence such a treatment plant, which has the capacity of generating 450 units of power per day.

Speaking to Herald Abhishek Balu Khadekar, engineer, Urja Bio System at the plant said at the moment nearly one tonne of vegetable waste is being treated in the plant.

"Yes, we required nearly 5 tonnes of waste to put the plant fully operational. We have just begun with treatment of vegetable waste," he informed.

He also stated that in the next few days of time they will commence with the treatment of fish waste.

But according to the sources, the plant is even facing a shortage of vegetable waste to treat.

"Hardly 4 to 5 dustbins of 100 kgs each are brought by the MMC workers to the plant, wherein the machinery in the plant demands more waste to operate," said the sources.

At the time Herald visited the plant at around 10.30 am on Monday, there were hardly three empty dustbins at the entry point and two workers waiting to start the machinery. They were sitting ideally at the plant.

Chairperson of MMC Lyndon Pereira said he has been informed by the officials of the plant that one tonne of vegetable waste is being treated at the plant on a daily basis.

“The plant is running on a trial basis, and it will be fully operational in the next couple of days," he stated.

Shockingly, maximum waste of the SGPDA market is being noticed dumped outside the compound wall, and into the open fields, leading to major pollution. The waste is burned down by the unknown.

One of the fish cutting women at the market informed that fish waste is collected by the MMC workers and later on dumped at the Sonsoddo dump yard on a regular basis.