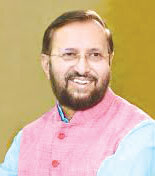 PANJIM: Amidst mounting opposition to the proposed doubling of the South Western Railway track in Goa, the National Board of Wildlife (NBW) has granted its green signal to the proposed project running from Tinaighat-Castlerock (Karnataka) to Caranzol (Goa), passing through protected areas like Dandeli-Anshi tiger reserve, Bhagwan Mahaveer Wildlife Sanctuary and Mollem National Park.

The clearance comes even as the Central Empowered Committee (CEC) of the Supreme Court, that is hearing the complaint filed by NGO Goa Foundation, is scheduled to visit the State this month to inspect the three infrastructure projects – double tracking of railway line, power transmission and national highway expansion – proposed within the protected areas.

Union Environment, Forest and Climate Change (MoEF&CC) Minister Prakash Javadekar took to the social media to announce the decision of the NBWL.

NBWL has recommended the project for Environment Clearance (EC) to the MoEF&CC, taking into consideration certain mitigation measures as advised by the Wildlife Institute of India (WII), Dehradun.

“Happy to inform that in its 60th meeting, NBWL has recommended the proposal for Tinaighat-Castlerock-Caranzol railway doubling of South Western Railways, Karnataka, with certain mitigation measures as advised by WII,” Javadekar tweeted.

During the Standing Committee on the NBWL’s meeting held in July and November, 2020, the decision on the proposal was deferred, pending a detailed study from WII to prescribe mitigation measures in the terrain of the proposed areas. WII was asked to submit the report within two months.

In Goa, the South Western Railway through Rail Vikas Nigam Ltd has submitted a proposal for diversion of 138.39 ha of forest land under the Forest (Conservation) Act, 1980 for railway doubling tracks from Castlerock to Kulem and Kulem to Margao. Out of this 128.294 ha fall in Bhagwan Mahaveer Wildlife Sanctuary.

The Goa government is currently facing severe criticism for allowing the doubling of the track as it passes through protected areas. Former ministers, opposition leaders, environmentalists, students, and concerned citizens have made several representations to the State and Central governments opposing the project.

The opponents of the projects claim that the project is to facilitate coal transportation; the State government has denied it.