Silver linings visible as the surge in Curtorim followed by Ambelim have somewhat stabilized, health officials on the ground believe that most are linked to other State COVID hotspots; Moti Dongor declared as containment zone on Monday 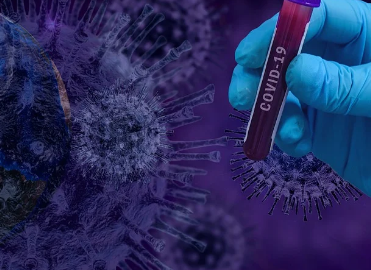 MARGAO: On June 14, it was not even on the list, but from June 15 onwards, the serene villages of Salcete have seen an alarming rise in cases of coronavirus positive patients.

Curtorim entered the list of COVID-19 confirmed cases on the June 15, with one person having tested positive. After his visit to the doctor nearby in Curtorim, and then with the doctor along with the family being infected, the number just went up. Raia too had detected 1 case on June 15 and was an isolated one.

However, the rise in cases on every second day has been alarming. On the June 16, Curtorim had 4 and Raia had 2 cases. On the very next day on 17th, the cases rose to 8 in Curtorim and 2 in Raia. By June 18, the cases had reached the danger mark with Curtorim having 10 cases and Raia having 7. On June 18, the Health Department was in for a surprise as a case in Ambelim, Chinchinim cropped up. Ambelim jumped to 6 cases on the very next day as Curtorim was at 12 cases and Raia consolidated at 7 cases. Now, they were not isolated cases anymore.

While shots fired in St. Cruz, cases in Curtorim jumped to 17 on June 20, following which Ambelim was no more under the "isolated" cases heading as the 6 cases started worrying the administration.

Margao too entered with isolated cases and was at 8 cases on June 20. On June 21, the worries had started, as Curtorim reached a count of 21 cases while cases linked to Ambelim had reached the number 13, which was double.

The woman from Chandrawado, Fatorda who died, was a case linked to Ambelim spread, which goes to explain how complexly the virus is spreading its roots into the villages of Salcete. Margao had reached 10 cases by now.

On June 22, Curtorim was at 25, Margao crossed 16 cases and Ambelim linked cases reached 15. Cases in Raia, however began to reverse with one cured, bringing down the count to 6. On the very next day, there were 3 cases reported from Navelim, and the count of Raia was up to 11 cases. Curtorim reached 28 cases while Margao remained the same.

The cases of Curtorim peaked on June 25 with 31 cases in total, while Ambelim cases jumped from 15 to 24, only to increase to 27 on June 26; whereas the detection had steadied in Margao, Navelim, and Curtorim. On June 27, extensive contact tracing and efforts helped find more cases of Covid-19 infection in Ambelim taking the total to 31.

Today, the trend has started reversing or stabilising in most of the Salcete hotbeds of the pandemic infection spread.

However, it is worth underlining that the spread has started from the Mangor hill and has created more branches across the taluka. Mangor hill spread took the virus to almost all the parts of the State. The case in Ambelim too is connected to Mangor Hill, while the cases in Curtorim, Raia are reportedly from travellers who came from other States.

But worrying news has struck Margao as the slum of Moti Dongor has also been found housing positive cases. The count was 8 till 29th morning. Margao MLA Digambar Kamat said, "I have had a meeting with the District Collector to handle the situation. The Collector has sent police and barricades have been installed and exits have been closed. I have asked for extensive swab testing which was done" said Digambar, while adding that he has asked the Collector to do all that he can in his powers.

The micro-containment zone of Curtorim has succeeded to reverse the trend of the virus spread. All through it has been noticed that extensive testing, has enabled the administration to quantify the threat of spread and the corrective measures in those areas have helped to reverse the spread.

Curtorim MLA Aleixo Reginaldo Lourenco has claimed that the virus spread into Curtorim through vendors dealing in fish and vegetables, fruits. "We had held a lockdown in the village to make sure that we try to arrest the spread and with the sincere efforts of Curtorkars, the results are being seen now," Reginaldo added. 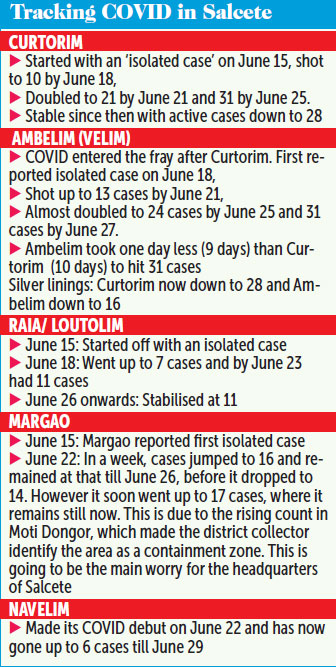