Sattari woman at the mercy of nature: Getting flood relief more painful than the floods itself

Promised a home by the MLA, they are battling monsoons in a hut made of leaves 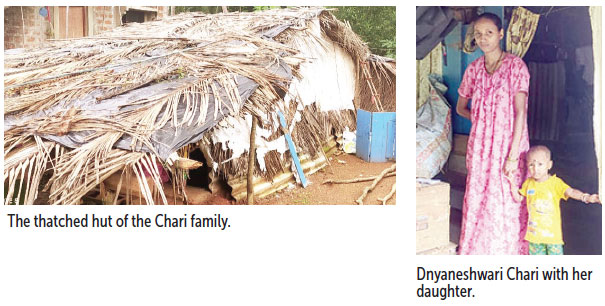 VALPOI: She is homeless. And helpless. As the  rains make her "home" patched together with coconut leaves wet and damp, much like her hopes from a system.which promised  her "releif" when he oroginal home was washed away by last years floods.

The Valpoi MLA Vishwajit Rane, she says had promiser to build a home for her. But that was then, the monsoonsnof 2021. From then to now the monsoons have returned and the elections are over.

The Chari family from Ambedem village in Valpoi, a victim of last year’s Sattari floods, is still not rehabilitated by government and the Health Minister even after one year has elapsed.

There were floods in Sattari Taluka for the past two years during the monsoons. Last year many houses had collapsed and many agricultural fields were destroyed in the floods.

The Government had promised the flood-affected people that they would rebuild their houses but a year later they are still to be rehabilitated. This, despite submitting all the details of their losses to the Valpoi Mamlatdar, Deputy Collector and the Valpoi Zonal Agriculture office.

Flood Victim Dnyneshwari Chari said that her husband and a daughter are homeless for the past one year.

The Valpoi Mamlatdar had done the site  of their hut and sent the flood report to the government but till date she has not received any financial help from the government.

Nagargao village panch had also visited her and assured her of financial help to rebuild their house, but in vain.