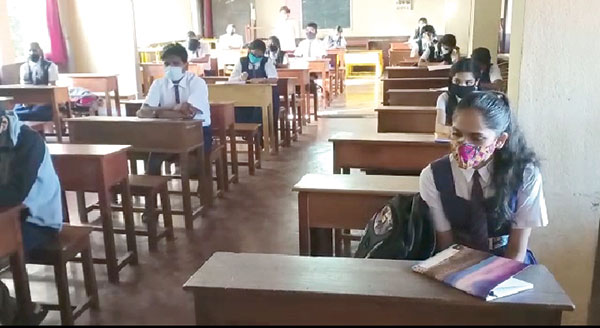 PANJIM: After a gap of nearly six months since the commencement of the Academic Year 2020-21 due to COVID-19 pandemic, the schools in Goa finally reopened for the students of Classes X and XII, on Saturday, evoking a mixed response.

BICHOLIM: The schools in Bicholim witnessed 50-70 per cent attendance.

According to the sources, most schools in Bicholim had only one class and 13 students were made to sit in each classroom. Of the 50 students, 40 attended the classes.

In Sanquelim also many schools had only one class.

"Today we had called only one class and there was 50 per cent response. Next week we hope that this response will increase when parents and the students gain confidence," Headmistress of Progress High School Surekha Desai said.

In Sal, a school had called only 20 students for one class but no one attended.

"Today we had a meeting to chalk out future course of action and from Monday we have called all Class X students. The picture will be clear next week and we hope that the parents will send their children to school," sources from the school informed.

The security guard posted on duty at the school was checking the students temperature with thermal guns before allowing students to enter the school.

One of such educational institutions, Keshav Smruti High School and Higher Secondary School divided classes into batches, stream and numbers, following the social distancing and also alternate day class to avoid crowding or rush in school. The institution has 150 students studying in Class X and around 180 in Class XII.

The school chairman and teachers teaching in the institution opined that the reopening of school has raised the bar for school teachers as they have to work hard to complete the syllabus in time with more numbers of classes following the social distancing norm with the limited teachers.

Teacher Nitin Phaldessai opined that COVID-19 pandemic also affected the learning and studies of the students. Almost after eight months, the students will attending the schools and after following the government SOPs we will be able to give proper classes and complete the syllabus of the academic year.

PERNEM: Most of the secondary and higher secondary schools reopened received good students’ response with more than 50 per cent attendance.

Similarly, the students also expressed relief from their online classes.

The students said that they are happy that the schools reopened as they were facing many problems attending online classes due to bad internet network connectivity.

The students said that due to bad internet network connectivity, it was getting difficult for them to understand what was being happening during the classes.

“Attending regular classes will help them to understand and cover portion more clearly,” they said.

Meanwhile, as per the government guidelines, the schools reopened after sanitising the premises, with only 12 to 15 students in each class. Also many schools provided their Bal Rath bus facility for the students to travel to schools which were also was sanitised before using. The students were told to sanitise their hands before boarding the bus. Also thermal gun was used to check the temperature.

PONDA: Following COVID-19 guidelines, many schools in Ponda Taluka reopened physical classes for Class X and XII. The schools also prepared their own SOPs and handed over to the parents and students.

The schools are reopened with the consent of parents,” said Headmasters of some school. The classes were commenced following all the safety measures.

Sharada English High School, Marcel, Headmaster said, “Earlier many parents were approaching to us for starting physical classes but as now the government gave permission to start physical classes we reopened the School and there is good response from the students. Few parents are still against physical classes due to COVID-19 infection.”

He said, “In our school there are 195 students studying in Class X and have four divisions. As per social distancing norm, we have started our classes in the morning and evening session with 12 students in each class. Our first session starts in the morning while second in the evening. We have scheduled time table and also divided teachers in morning and evening sessions.”

KRSS High School, Savoi Verem, Headmaster said, “All the students promoted to Class X attended the classes. With the consent of the parents, the classes are started, following the social distancing and other norms.”

Ananadi Bai Mahanandu High school, Marcaim, Headmaster said that there was good response from the parents and students. Out of 35 students only seven were absent but they are from outside State. We strictly followed the COVID guidelines.