Gives updates on decisions regarding banning entry of Goans into casinos, proposed Gaming Commissioner, relocation of offshore vessels and rules out shifting them to Mopa airport land 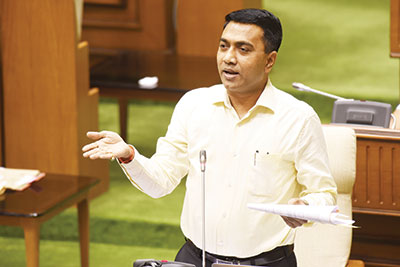 PORVORIM: The casino industry contributed revenue of over Rs 1277.29 crore to the State exchequer in the last nine years since 2012, the Chief Minister Pramod Sawant told the  House on Thursday.

Further, Sawant told the House that the draft rules banning entry of Goans in casinos is under consideration of the government.

While admitting that the government is working on an alternate site to relocate the offshore casinos, Sawant ruled out any proposal to relocate them from River Mandovi to the land allocated to MOPA Greenfield International Airport.

The CM was responding to the different questions tabled by BJP MLA Atanasio Monserrate, Independent MLAs Rohan Khaunte and Prasad Gaonkar; all who sought to know the government's plan to shift the offshore casinos out of River Mandovi.

Sawant said that draft rules banning entry of Goans on casinos is under consideration of the government. The draft rules will also speak about the authorities that will enforce the rule, he said.

The CM also said that the draft Rules are under consideration of the Government for the functioning of the Gaming Commissioner.

Sawant added that the government had entrusted the task to the Captain of Ports for exploring the possibilities of relocating all the four offshore Casinos & One Passenger Vessel from river Mandovi to another sheltered locality/rivers within the jurisdiction of the Inland Waterways of Goa.

Accordingly, COP had undertaken various inspections and verified several sites within the Inland Waterways for relocating the offshore Casino/ Passenger vessels, he said adding that River Mandovi, River Zuari and River Chapora had been recommended as sites for the relocation.